I’m obsessed with street art. Last week I did a refresher of the walls in Salt River, one of the Mother City’s oldest neighbourhoods and with a prolific outdoor public art gallery. This article ran in the Sunday Times on 22 Sept, 2019 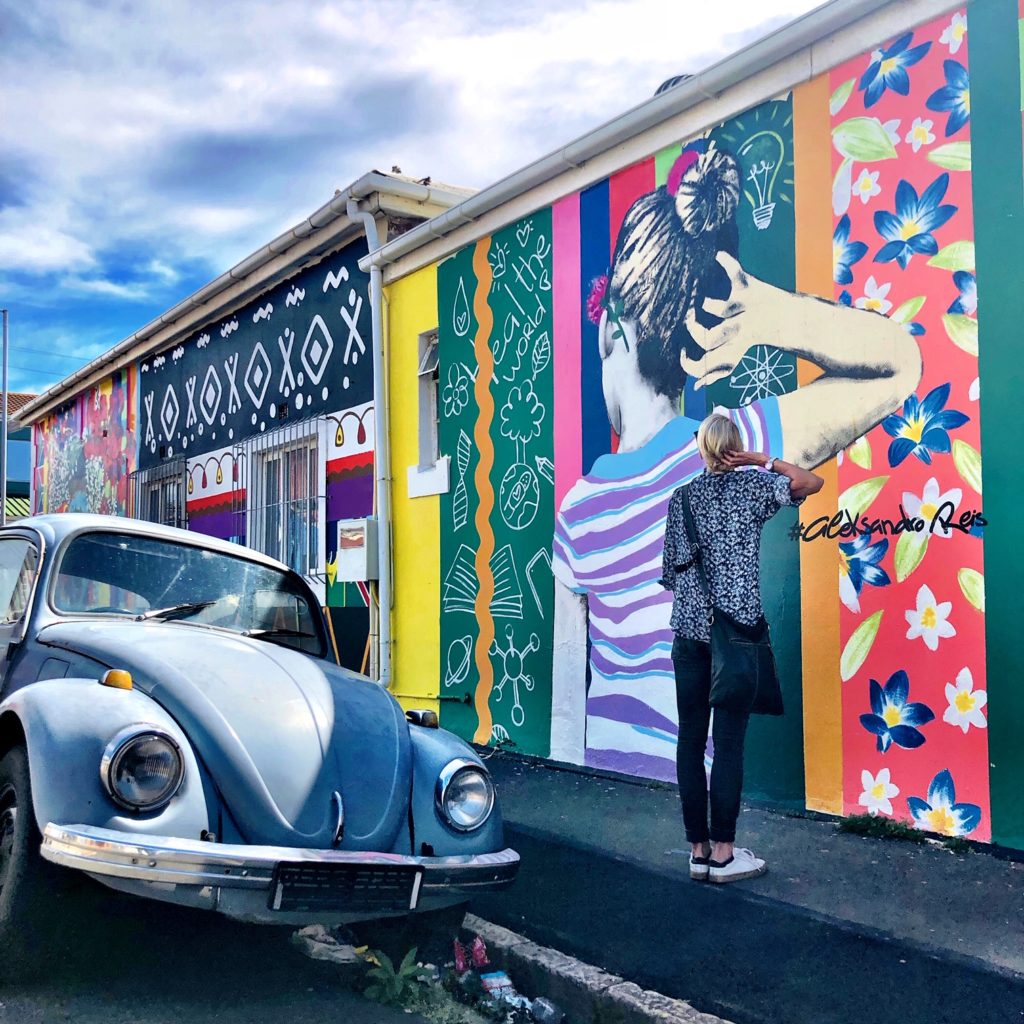 Street art in the Mother City is lit. Embraced as a cultural asset, this form of artistic expression is intrinsic to the urban landscape and has become a cherished part of the city’s heritage and DNA. 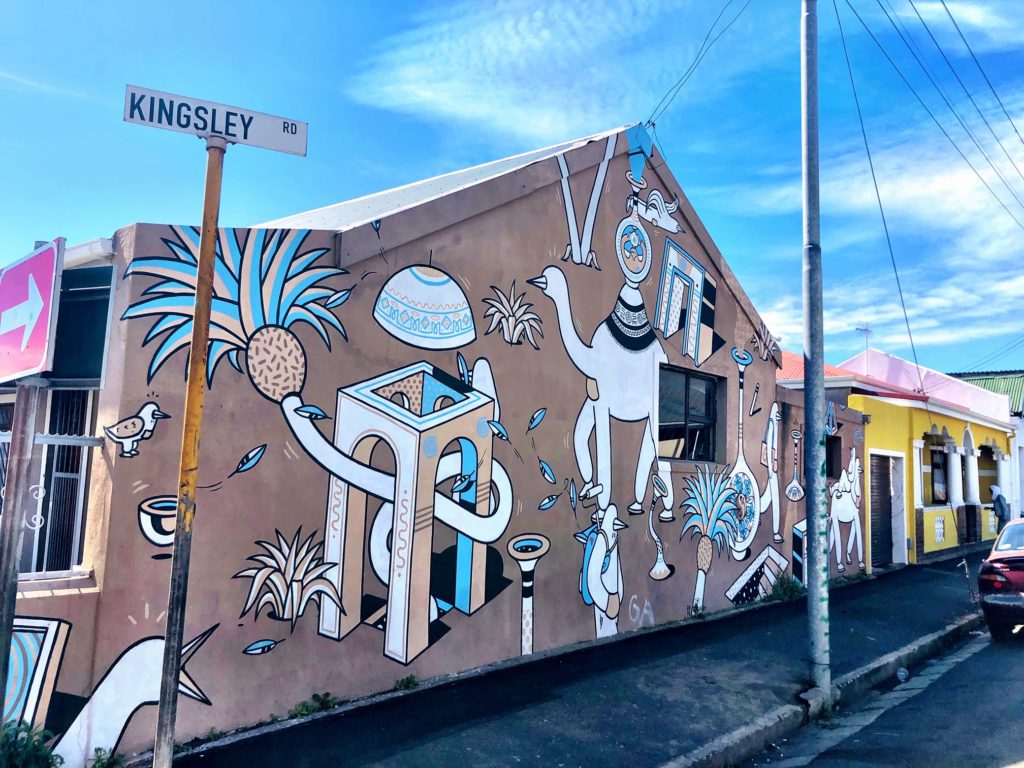 Kingsley Street mural by the Israeli crew, Brothers of Light

Street art has its genesis in graffiti, stylized lettering known as tagging that was first identified in Philadelphia in the 60’s when schoolboy Darryl McCray aka Cornbread (he is 66 today and still creating) started leaving his writing on the wall so to speak. Dissed as anti-establishment and vilified as vandalism, graffiti today resonates as a contemporary phenomenon that has morphed beyond the subcultural vocab once associated only with gangs and recalcitrant youth. 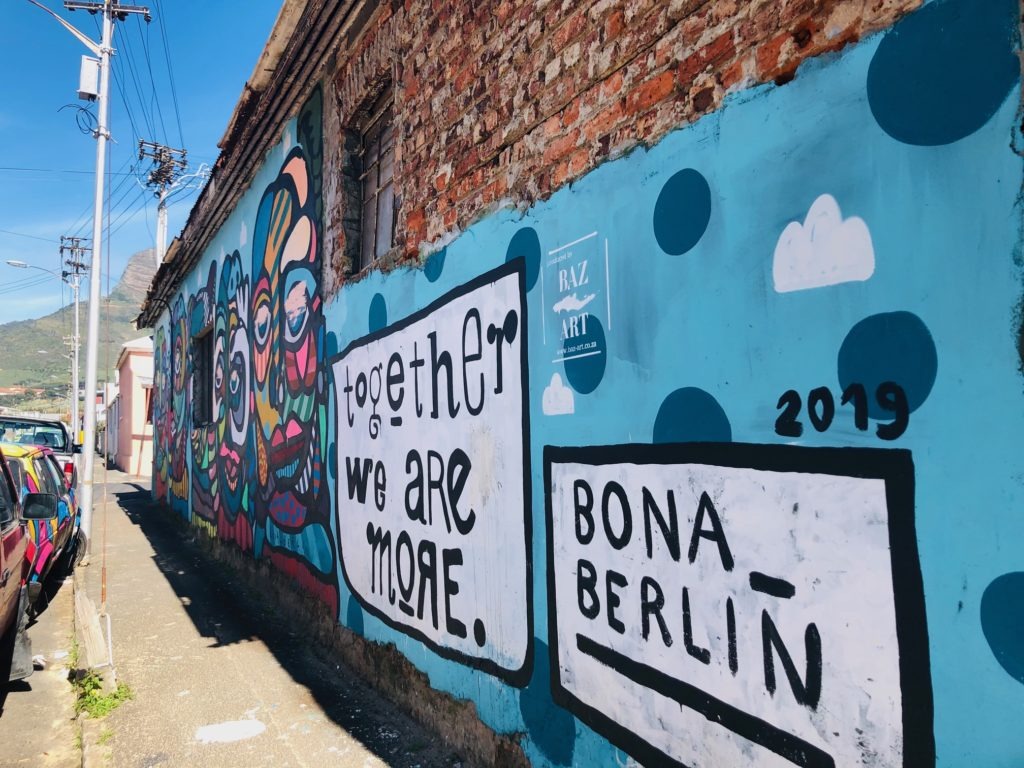 Together We Are One, by Bona _ Berlin on Chatham Street

Post the guerrilla graffiti wave of the 80’s, the rise of Banksy changed the street art game. Famously faceless, the art warrior with a predilection for provocation used his powerful stencils to speak truth to power. Perceptions shifted and so did the standard and quality of public art as a new generation of supremely gifted artists emerged, advocating professionalism, skill, originality and protocol over random scrawling, stickering, spot-jocking and the offensive sullying of public spaces. Their undisputed brilliance shone across the concrete jungles of the world and artworks once shunned were misdemeanours no more. Today, many of these individuals are commissioned off-street as well and their work fetches millions of dollars. 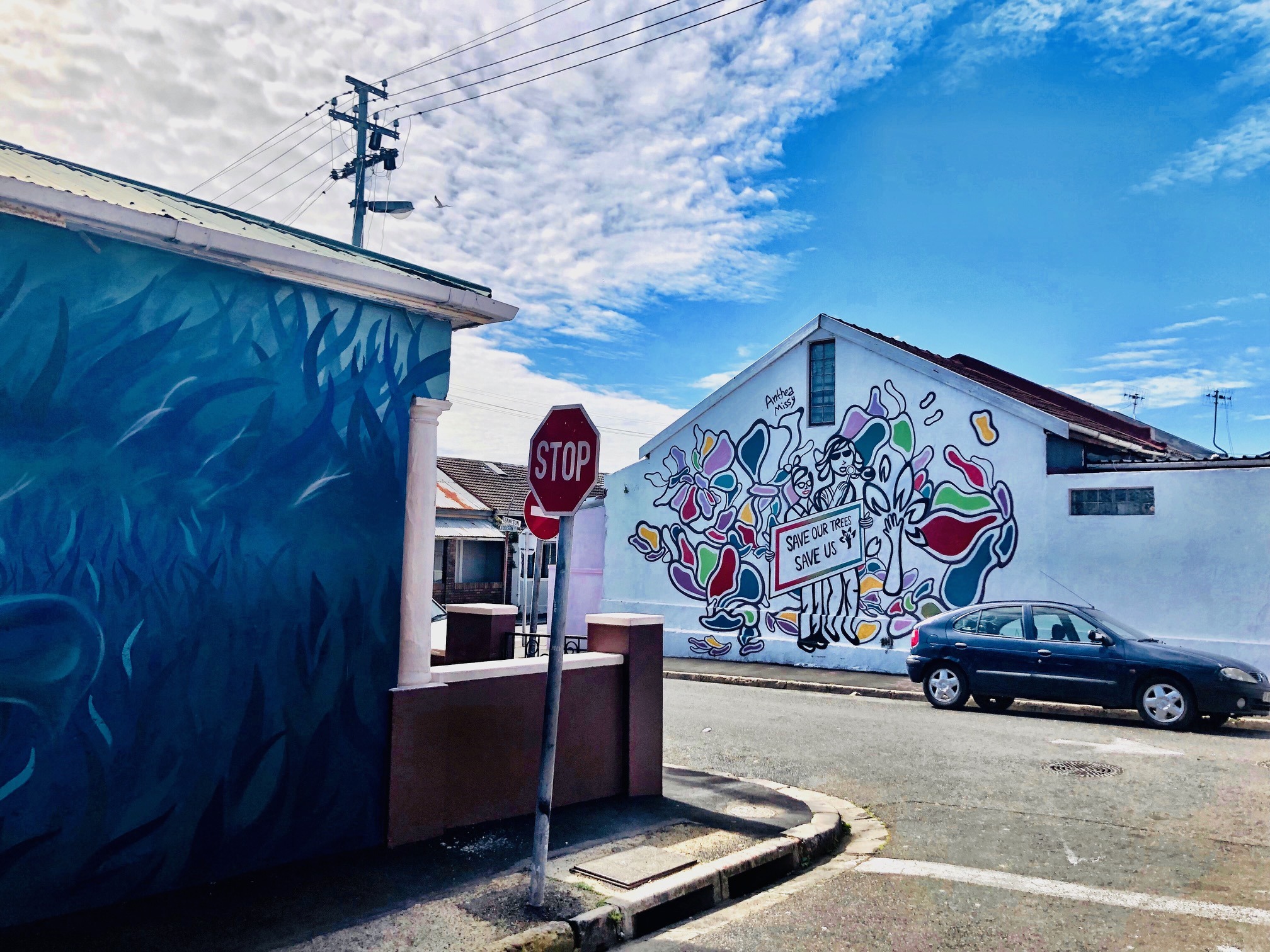 Today state-sanctioned street art is a thing. Take Salt River, once the textile and industrial epicentre of the Western Cape and one of only a handful of places that managed to evade forced removals during Apartheid. Given the challenging circumstance of the day, protest art and subversive messaging was commonplace, but over the past three years in particular, the suburb has seen a proliferation of incredible outdoor art, smartly curated through the annual International Public Art Festival (IPAF)  driven by Baz-Art. 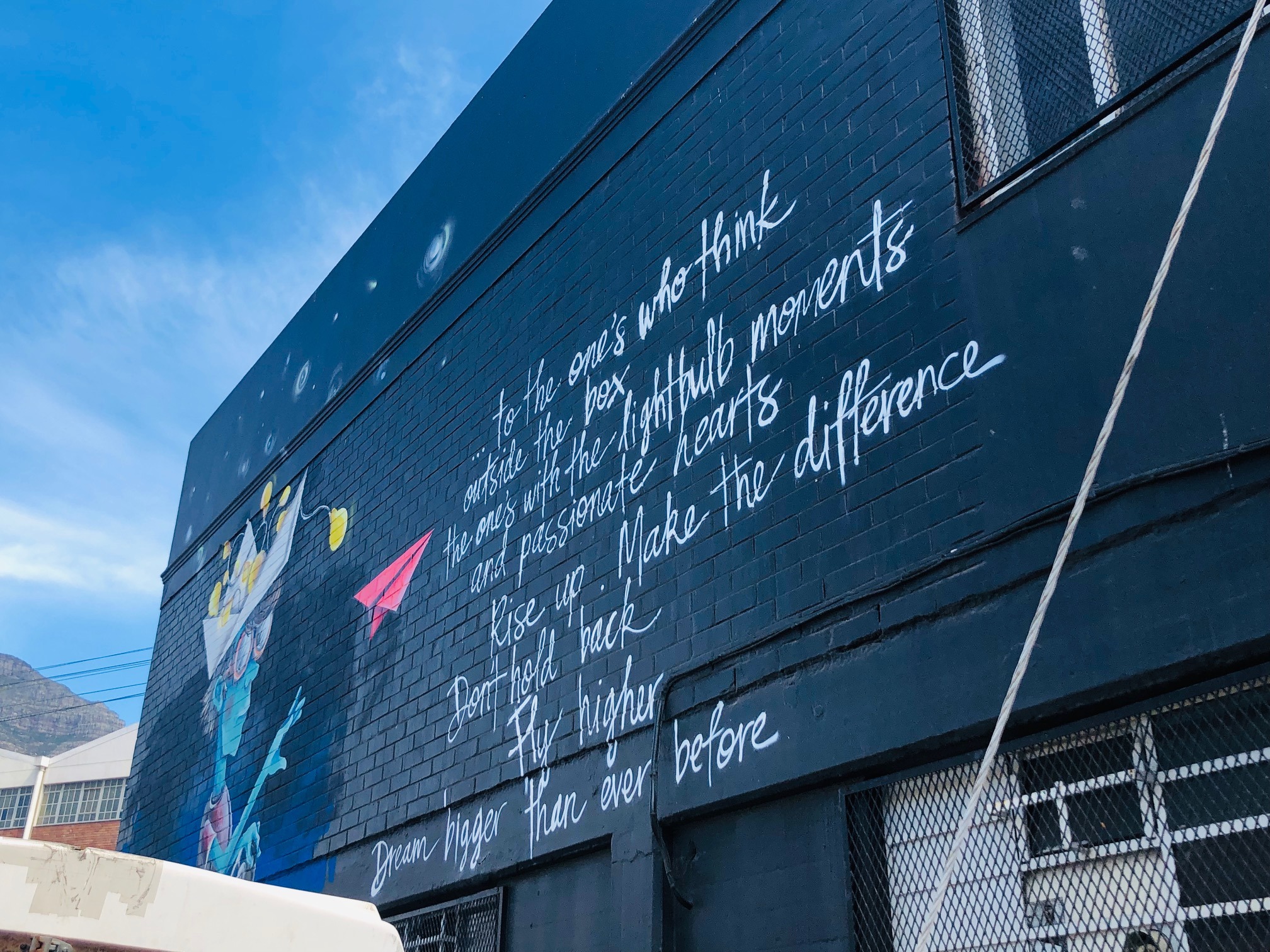 Each February since 2017, IPAF, an NGO, has commissioned up to thirty South African and international artists to produce simple and elaborate pieces on the walls and doors of private home, public spaces, schools, office blocks and factories. Creating to a prescribed theme, individuals and crews are charged with a mandate to promote inclusivity, dialogue, collaboration and positivity. 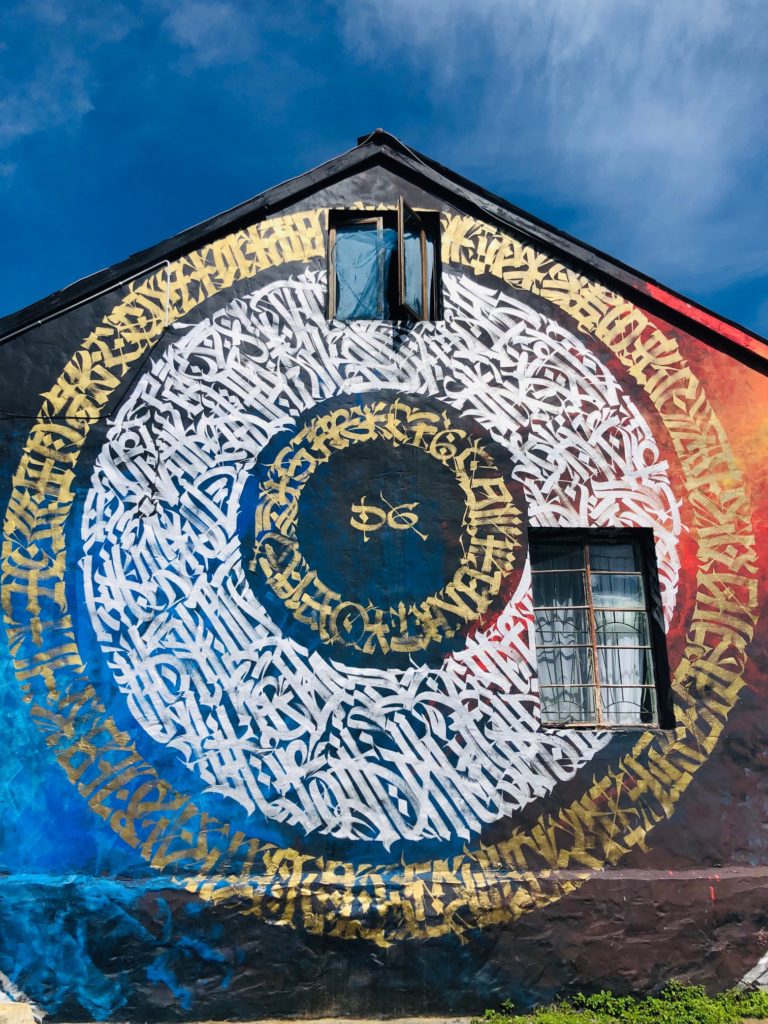 Remembering the forced removals of District 6

Community engagement is at the forefront and generated through partnerships between the City of Cape Town, residents, local cooks, small businesses and volunteers, and various fundraising efforts enable the up-skilling of tour guides and make provision for ongoing art classes and workshops at under-resourced schools and organisations. 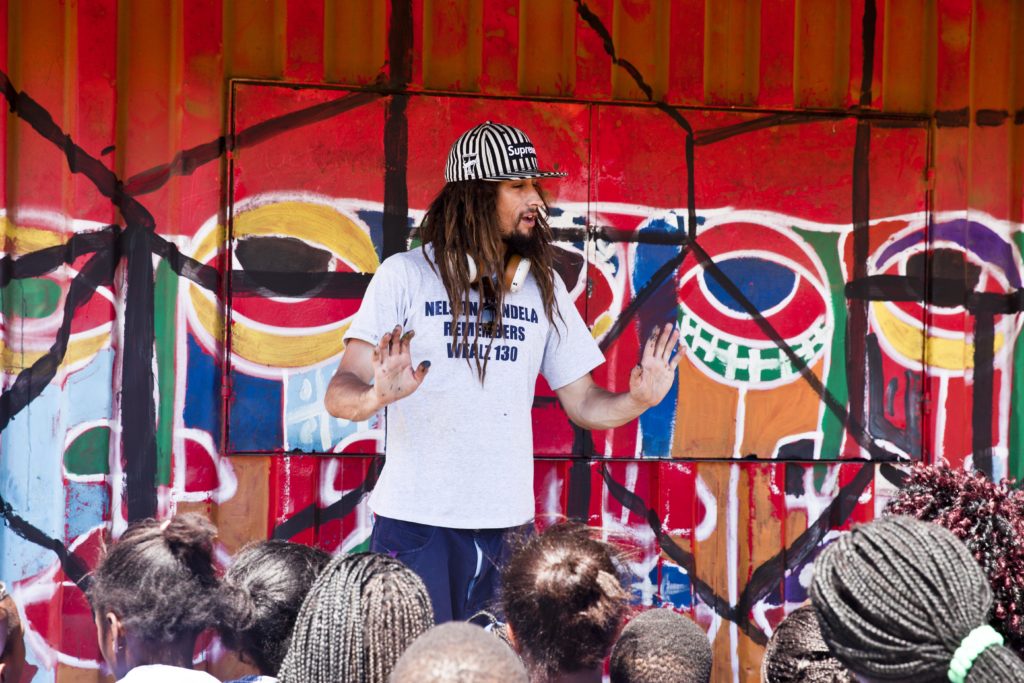 Residents and office workers watch with interest as creatives assume positions on the sidewalks, up ladders and in lofty cherry pickers to transform blank surfaces over a period of ten days.  At the IPAF launch earlier this year, Warda Rahim, Chairperson of the Salt River Residents Association commented that “the IPAF team could go anywhere with this project but they have chosen Salt River and we are overwhelmed by the transformation of our area.” 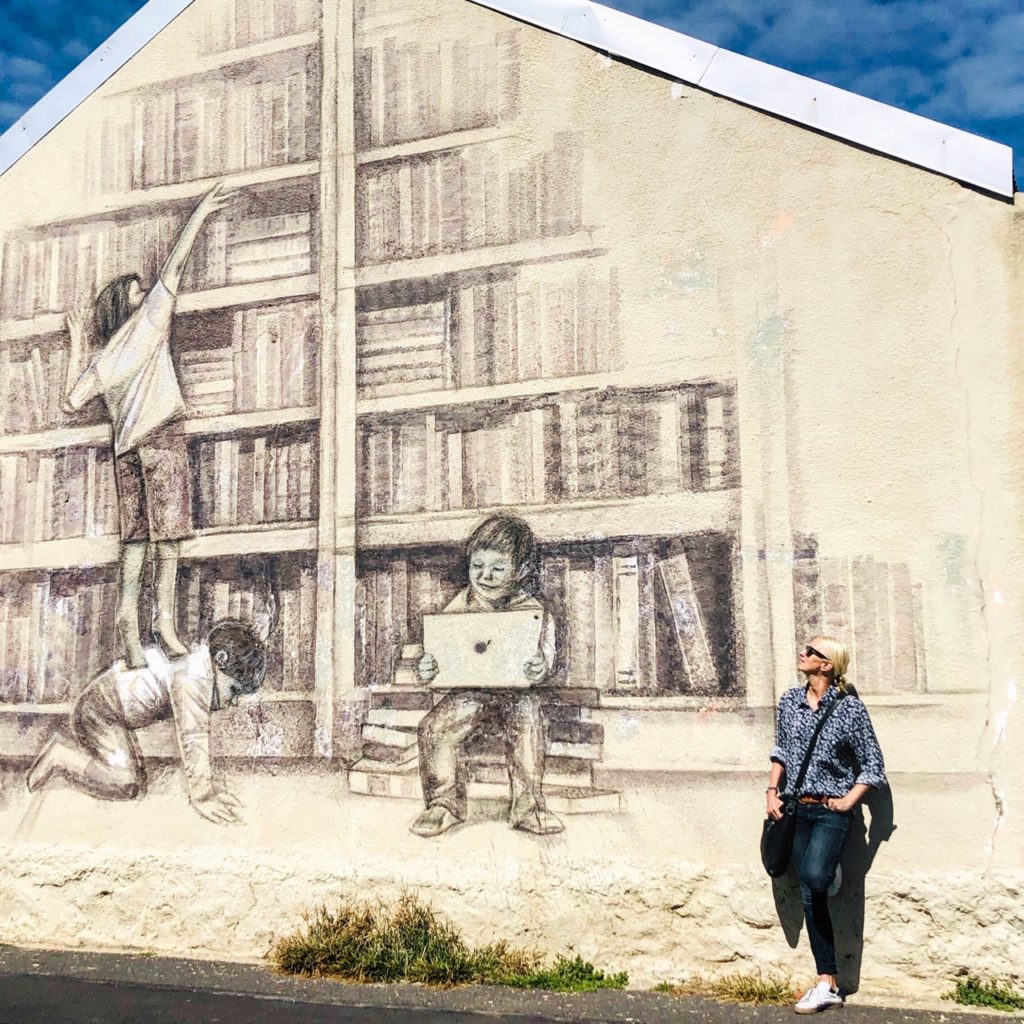 Justin Nomad’s mural The Library, on Tennyson Street, almost exactly where a mobile library once to to park every week, many years ago

Take a stroll through the CBD and neighbouring Salt River and Woodstock and there is no end to the bold beautification. Street art styles range from dot work to mosaics, calligraphy, photo-realism, portraiture, trompe l’oeil and full scale murals – some simple, others elaborate, and all relevant. Whether the final picture is message-driven, addressing socio political issues or simply there to uplift or make pretty, street art exists to make you stop and think. It’s universal, accessible and impacting. 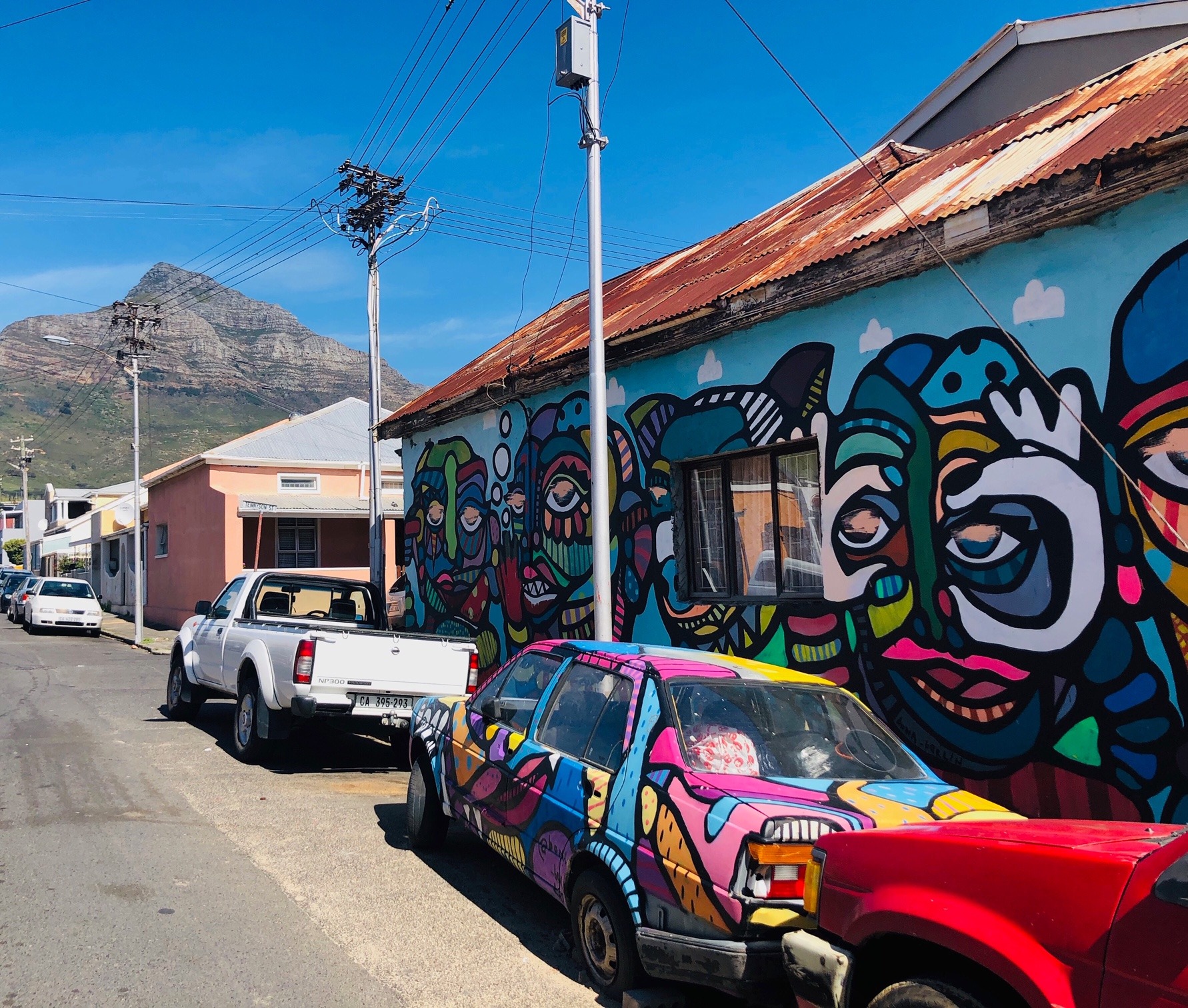 Banksy puts it succinctly – “Imagine a city… where every street was awash with a million colours and little phrases. Where standing at a bus stop was never boring. A city that felt like a party where everyone was invited, not just the estate agents and barons of big business. Imagine a city like that and stop leaning against the wall – it’s wet.”  – Wall and Piece 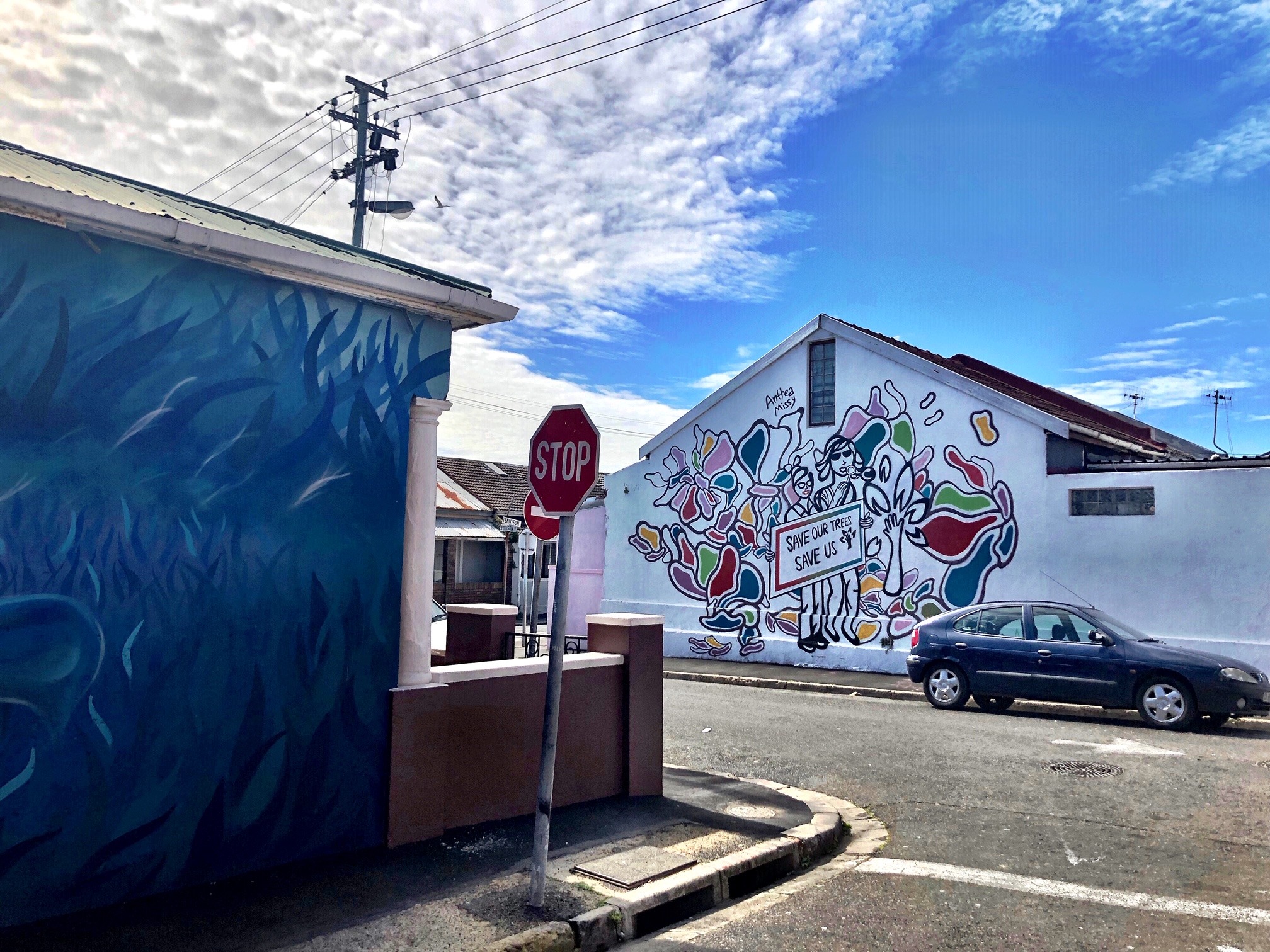 For more info about Salt River street art tours, art classes, workshops and IPAF visit www.baz-art.co.za. The next International Public Art Festival is from 12 to 17 Feb, 2020 with the theme ‘Digitalisation’. 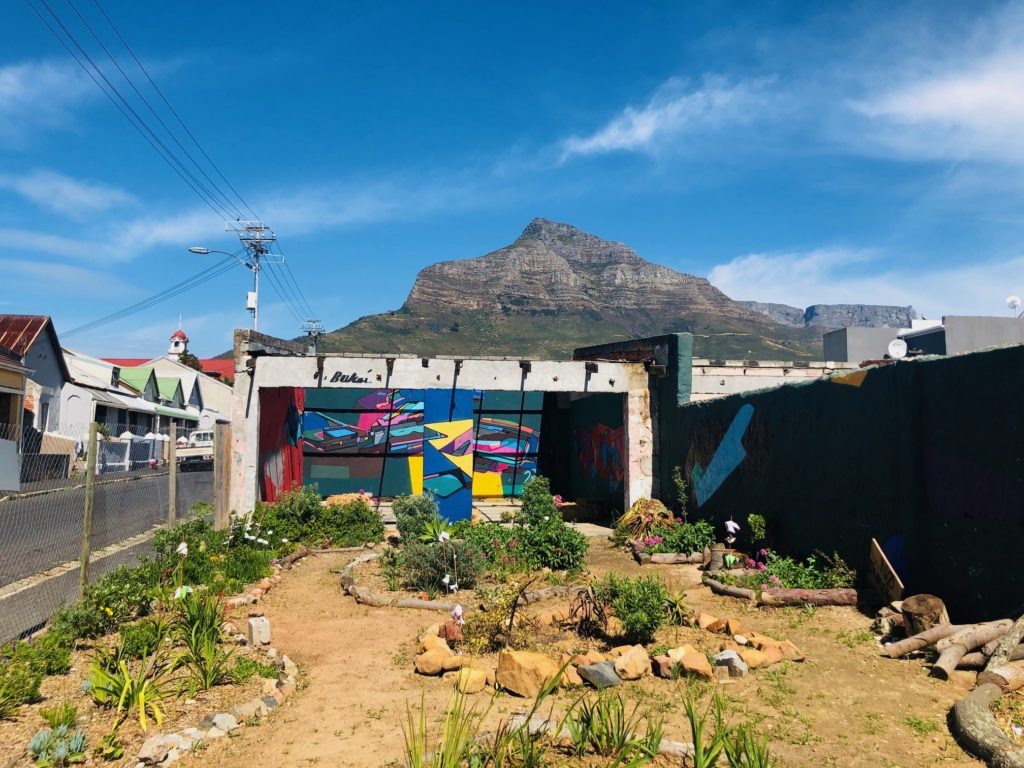 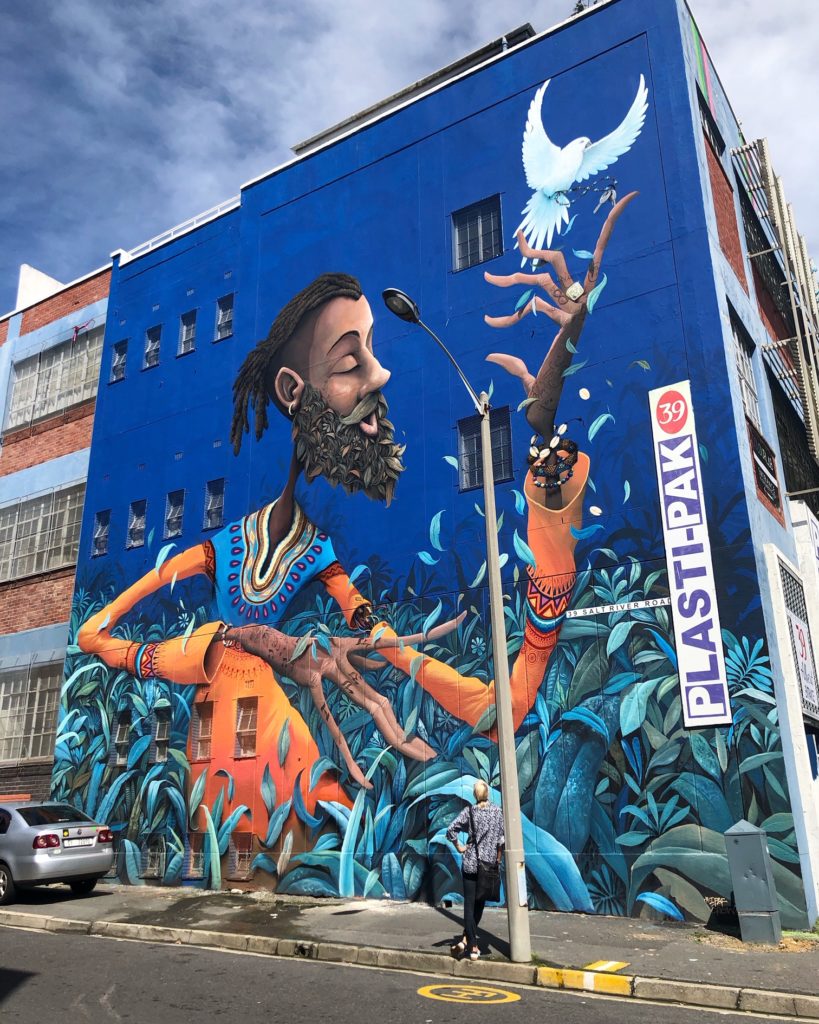 Nature is still the ultimate, by MAYE (France)

Cocktail alchemy at Outrage of Modesty in Cape...