* “Humans can’t live without art. It helps you understand the world and be able to live happily. You don’t even have to buy it because art is everywhere; it’s in architecture, nature and even your imagination.” – Chalermchai Kositpipat, Thai visual artist and the architect of the White Temple of Chiang Rai. 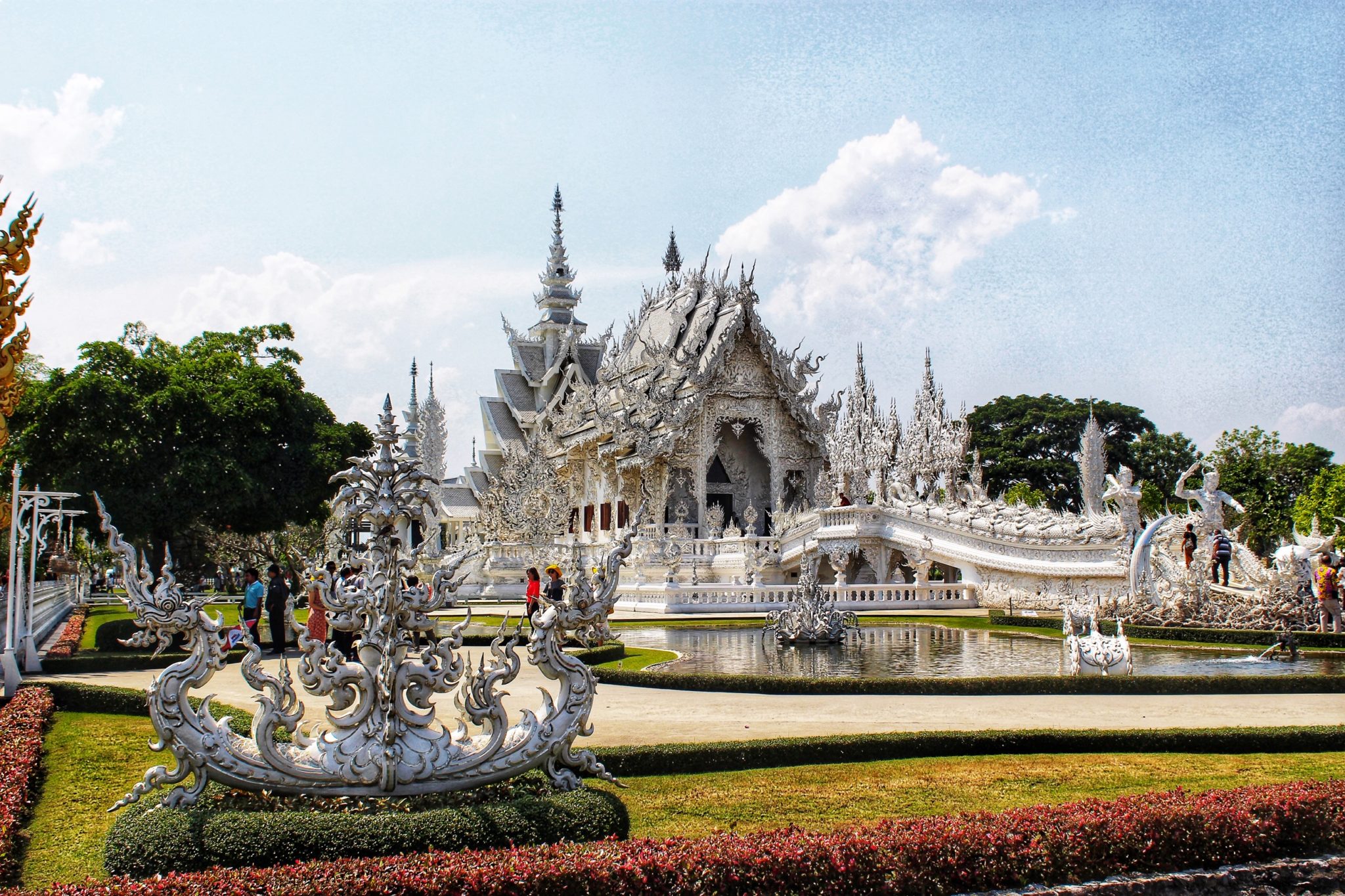 You’re in Thailand, Bangkok is in the bag and you’re looking for your next stop, somewhere to spend a few days before heading to the islands. Let me suggest Chiang Rai, the northernmost province that while being more of an industrial centre, is the gateway to a splendid attraction: the White Temple or Wat Rong Khun, the pièce de la resistance of the province. Let me show you why. (You can also watch my interview here with Lesley Simpson, the South African PR representative for the Tourism Authority of Thailand.) 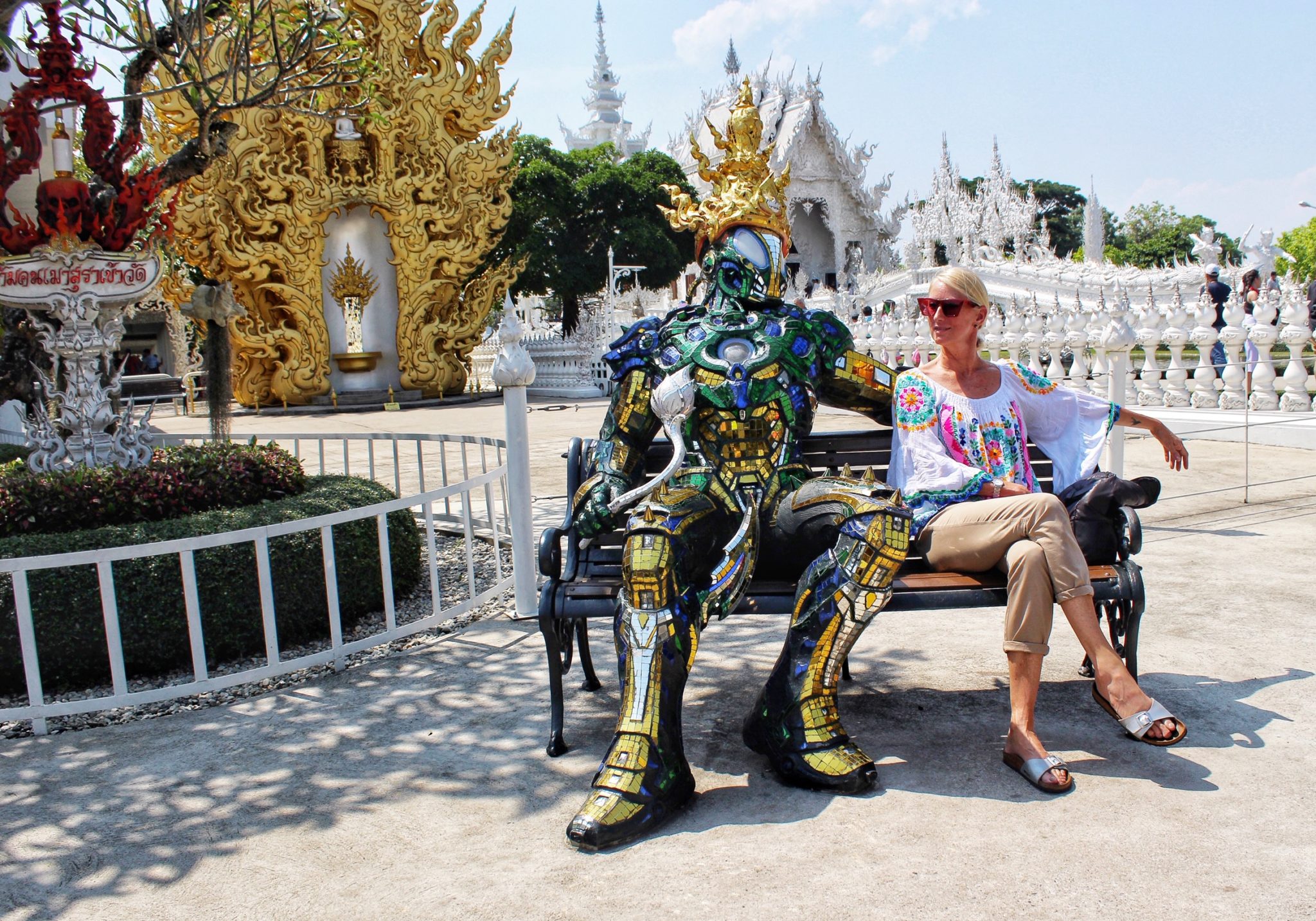 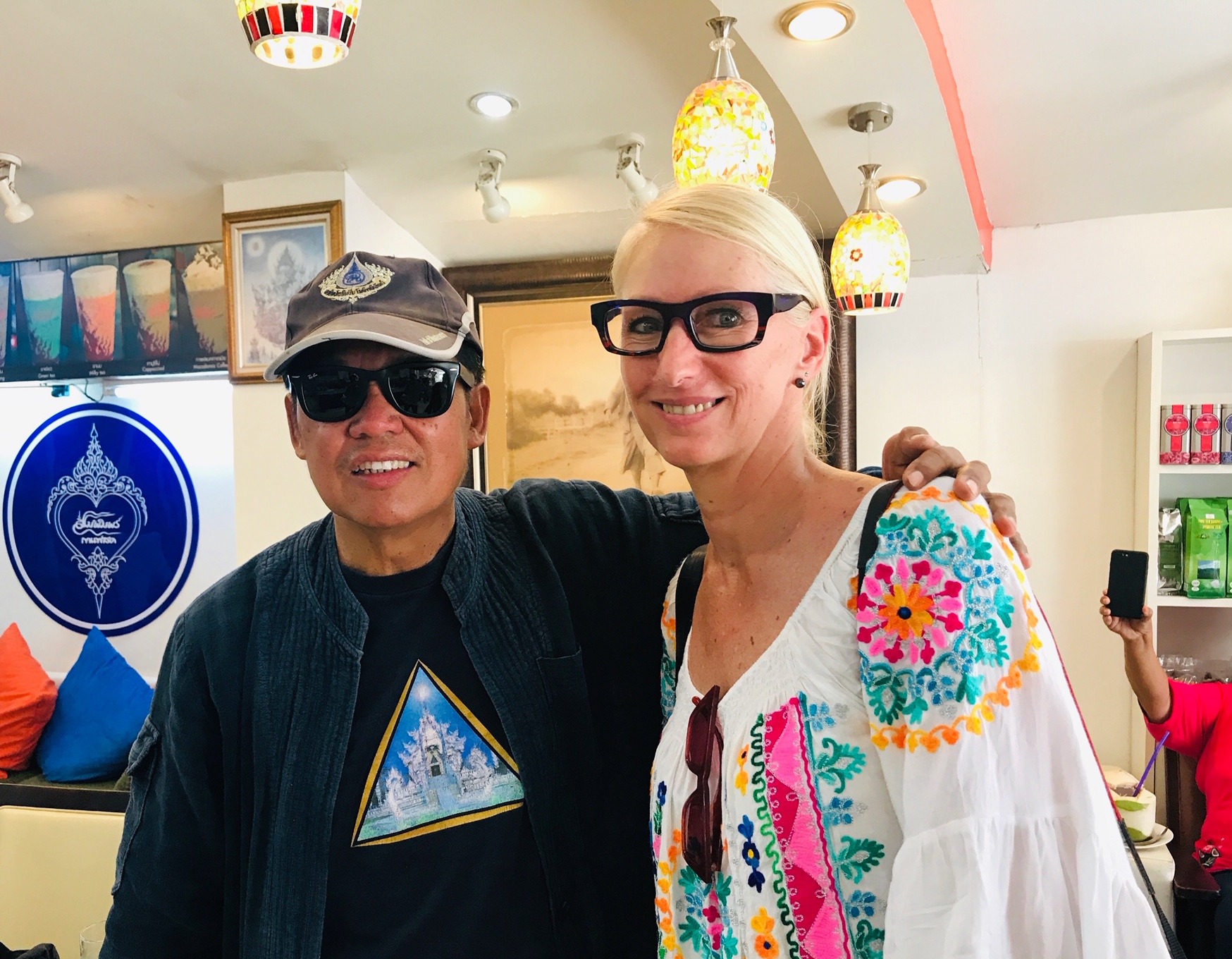 Chalermchai (above) attended Poh-Chang Academy of Arts and studied Fine Art at Silpakorn University.  Immensely proud of Thai art, he has always wanted to showcase it in a big way and with the White temple, he has accomplished just that, through a redoubtable feat of design and engineering: The White Temple in Chiang Rai! 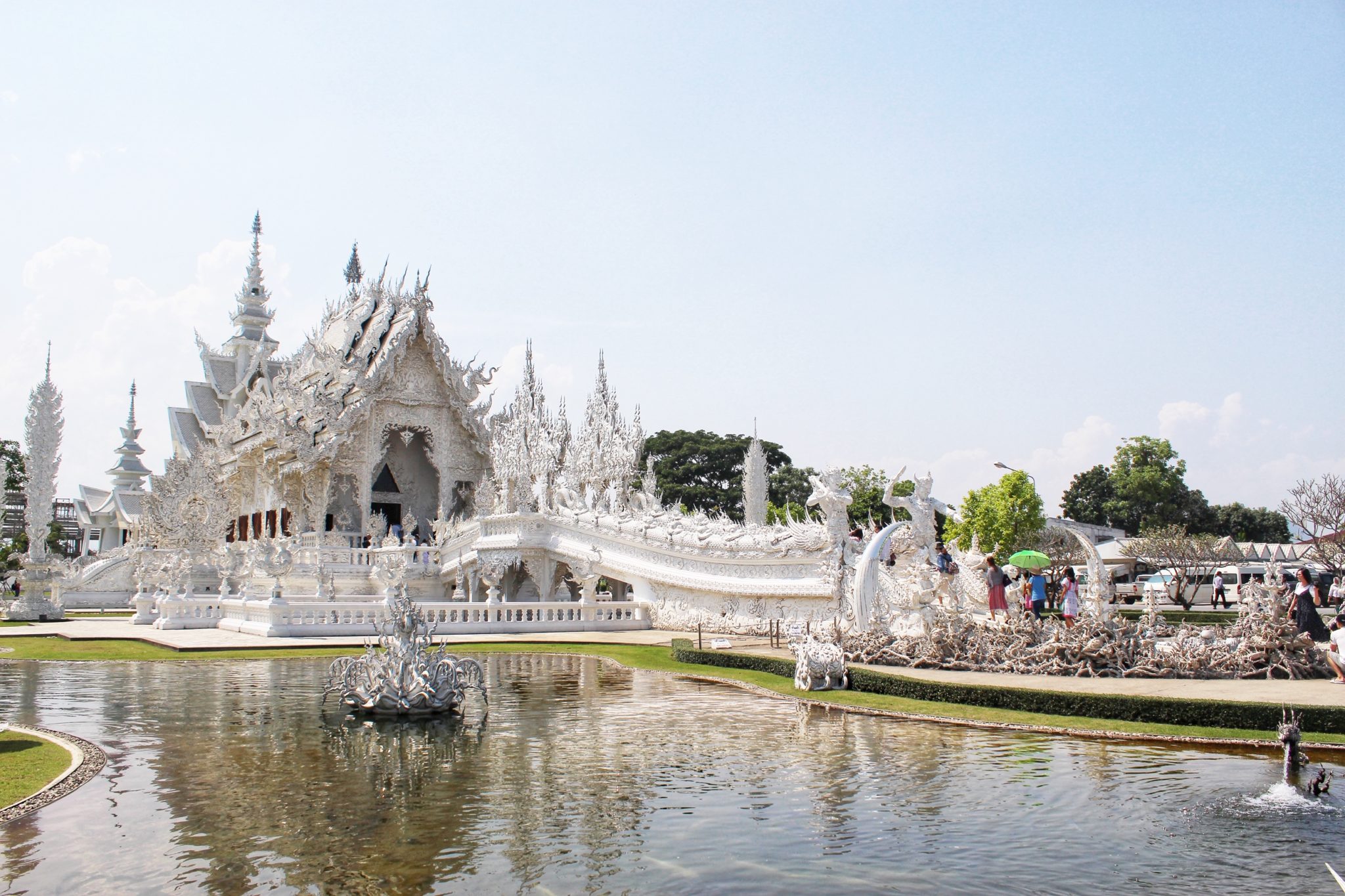 IN HONOUR OF THE KING

The illuminated shrine is a nonpareil masterpiece that breaks with traditional Buddhist temple design and is undoubtedly one of the most extraordinary religious structures in all of Thailand if not the world. While it honours the Buddha, Wat Rong Khun is dedicated to King Rama IX who passed away in 2016. 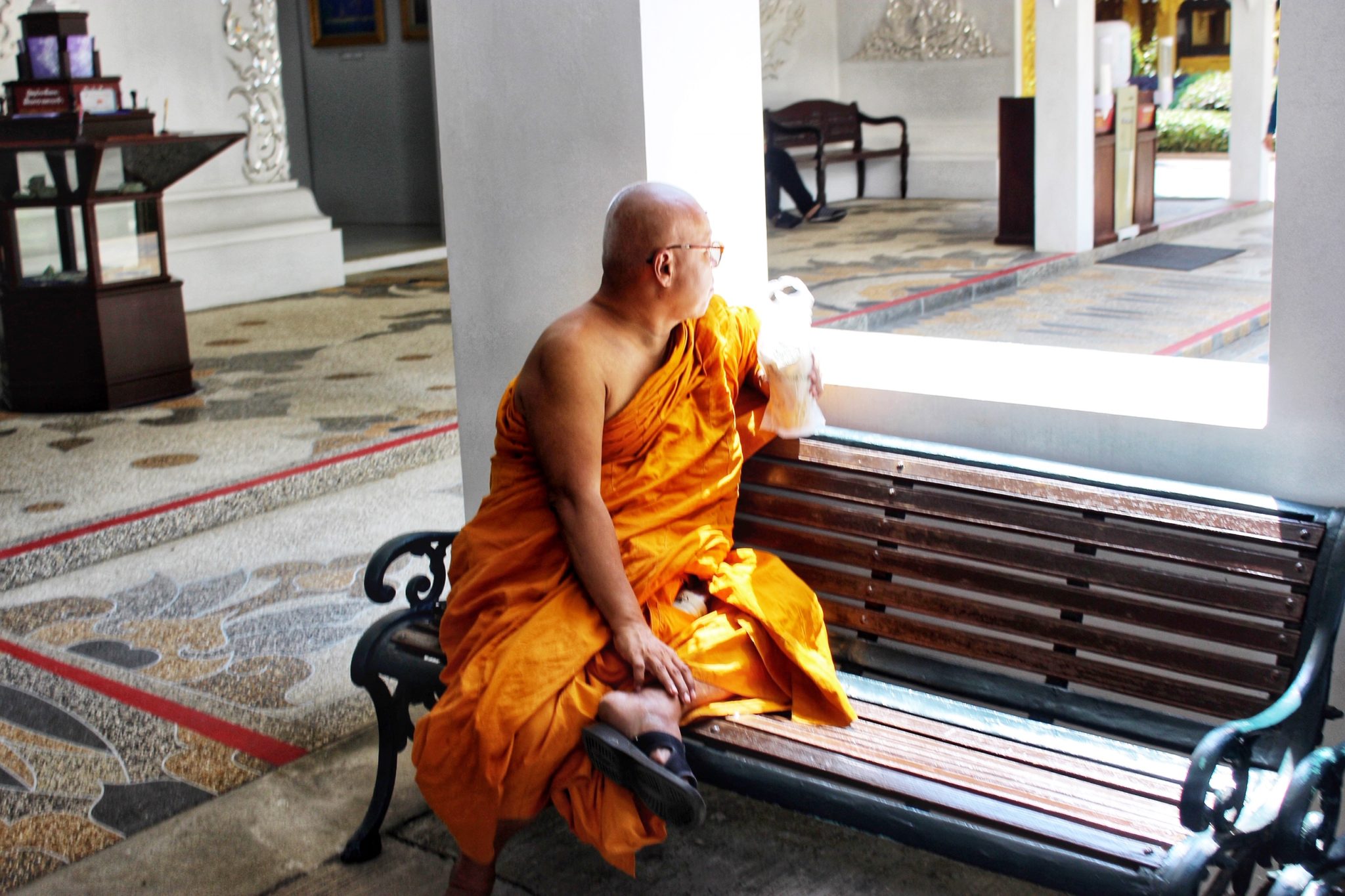 Chalermchai Kositpipat, 65, is the sole funder behind Wat Rong Khun, to the tune of 800 million THB / US$30 million). A painter and exceptionally gifted creative, he is often referred to as the Gaudi of Asia, and can sometimes be seen sitting unassumingly in the cafe opposite the temple. I had the pleasure of meeting him briefly the day I visited.

The temple build began in 1977 and is a work in progress, a few buildings shy of completion which is anticipated in 2070. What makes Wat Rong Khun especially unique is the art, a gallery of Kositpipat’s murals that adorn one of the main halls – engaging, confrontational and often controversial, an artistic coalition of religious and contemporary imagery, and not always well received.  When it became known that King Rama IX was a fan of Kositpipat’s work, it was an incontrovertible endorsement that positively swayed public opinion and quieted the monk fraternity. 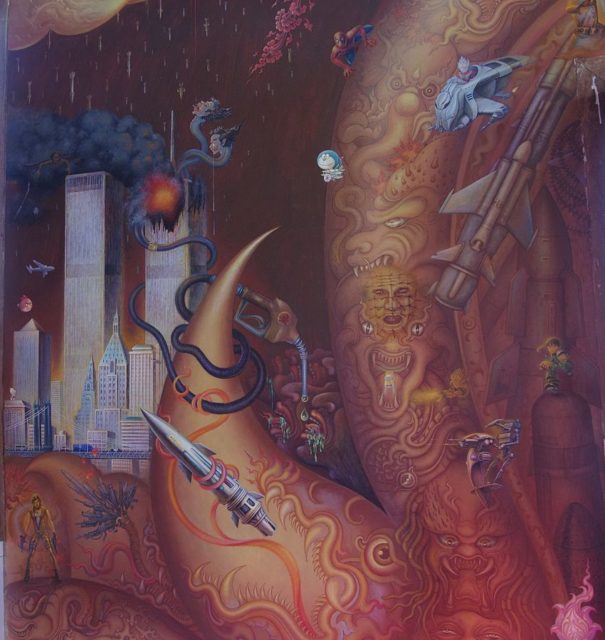 The exhibition is a huge canvas of his imagination – serious subject matter alongside the frivolous, and much of his work is message driven, purposeful. Love it or not, the art makes you think and it stimulates conversation. 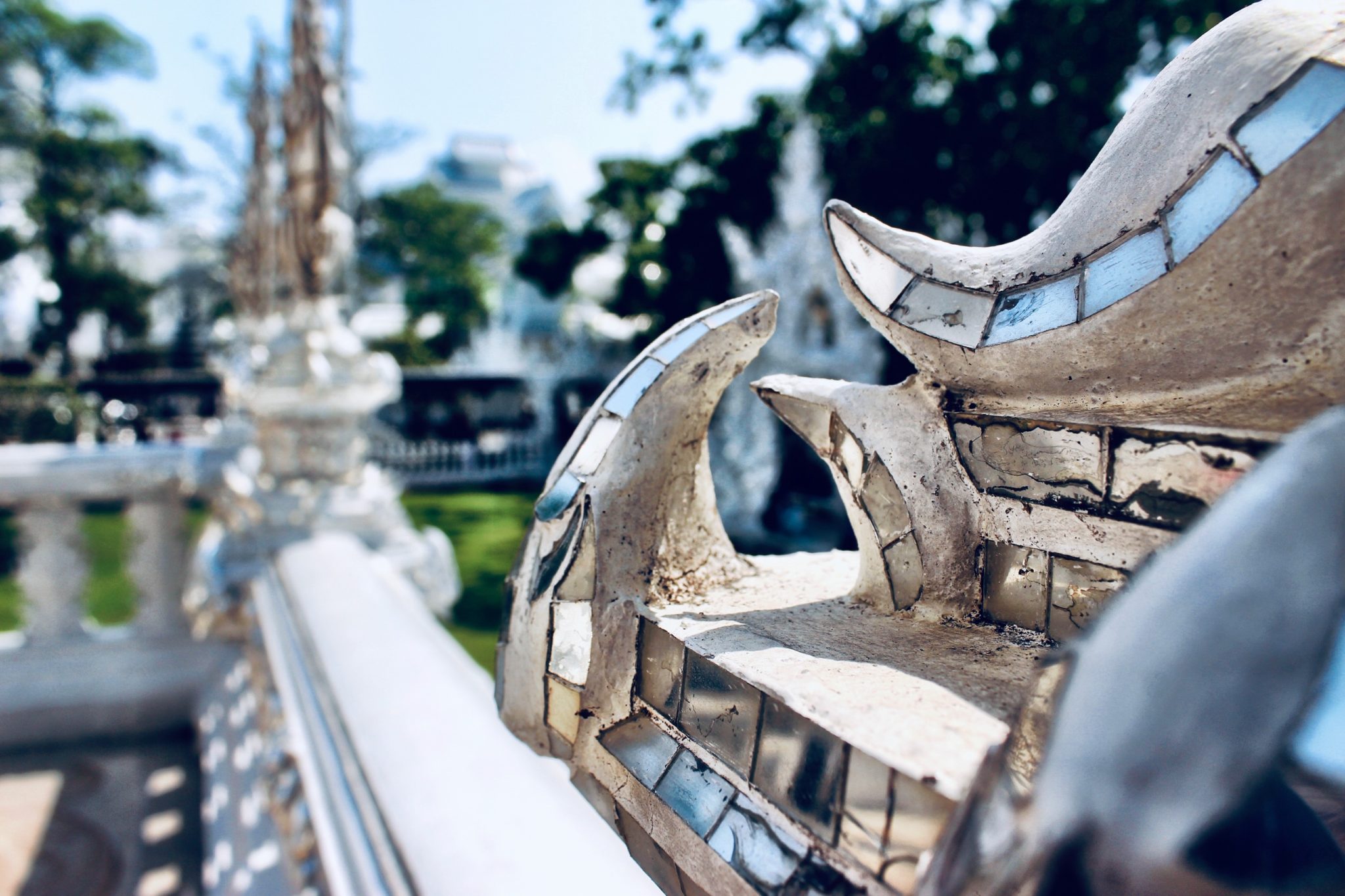 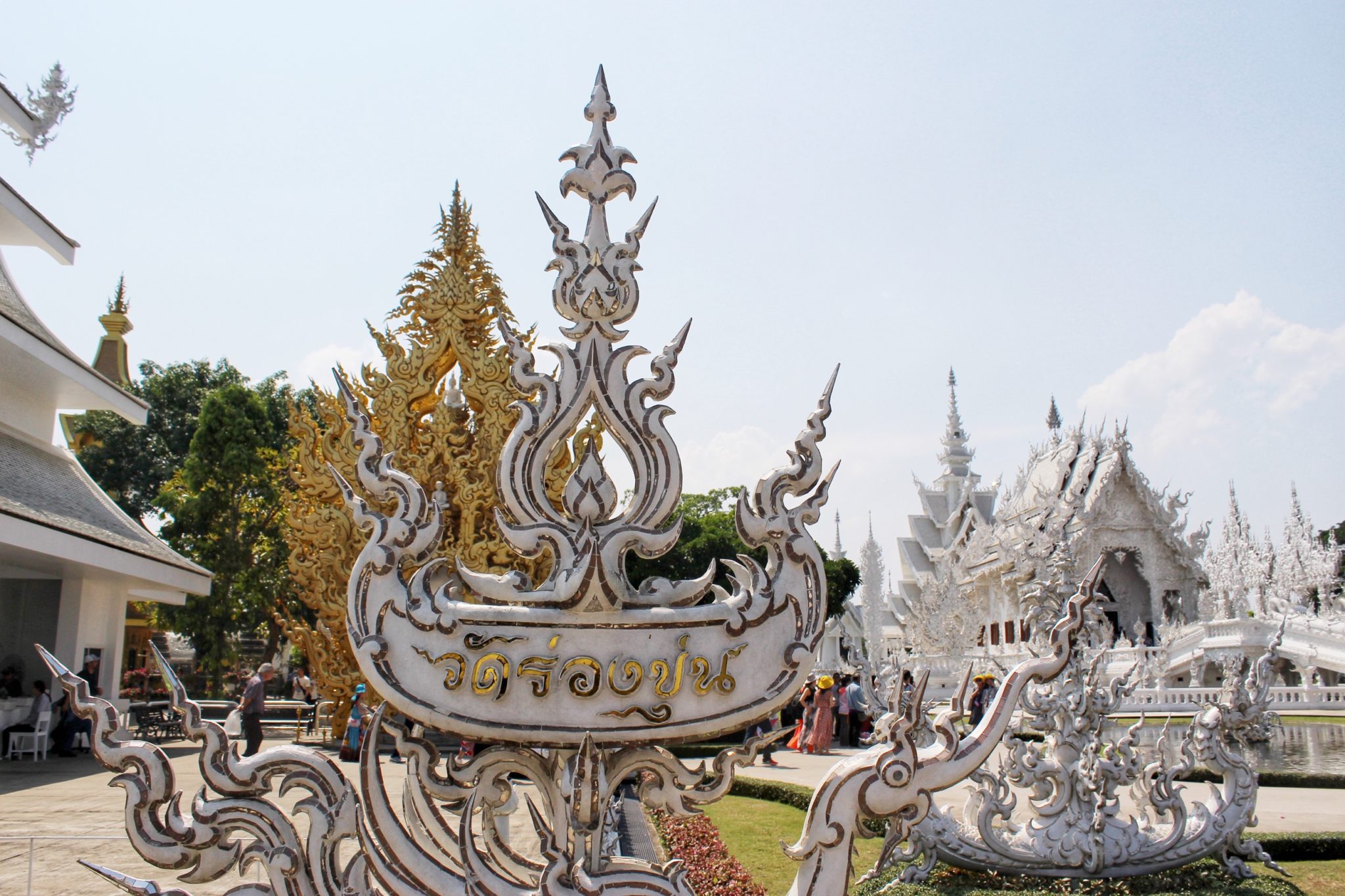 The temple is an ode to the ornate and is covered in intricate embellishments. As you cross the bridge over the lake and between the silver horns, you’re met by two kinnaras, creatures rooted in Thai mythology believed to protect people. ‘The cycle of rebirth’ is a disturbing mass of sculpted ‘hands of agony’, reaching up, paralysed in desperation. Quite disturbing and the most unconventional temple entrance  you’re likely to see. 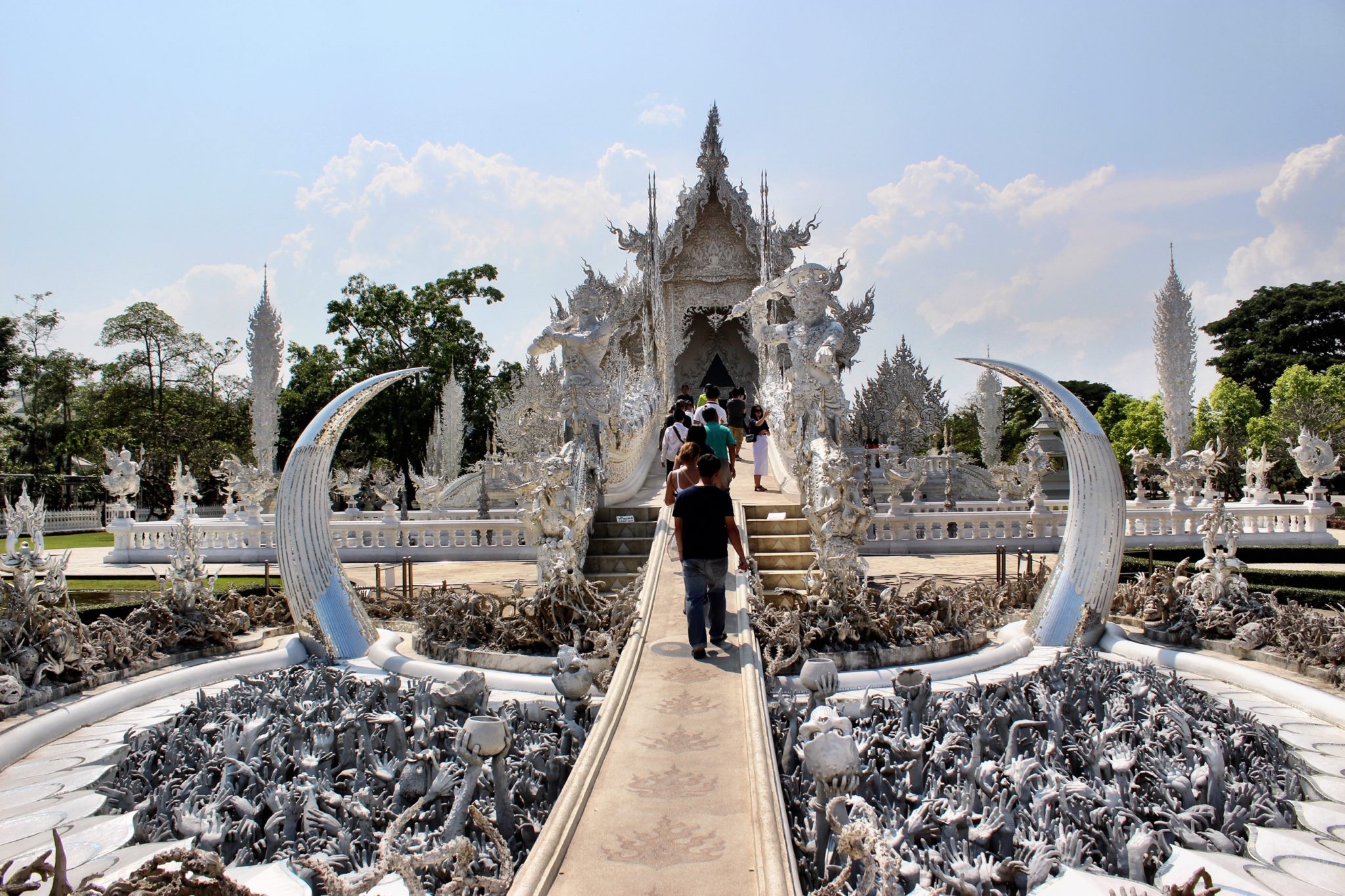 All around the complex are sculptures, not all of them pretty. Like the demons, hanging skulls and other bizarre objects, unexpected at a place of worship. Every detail of the white temple is meant to provoke curiosity and reflection. Kositpipat wants us to realise we can do better, be better. 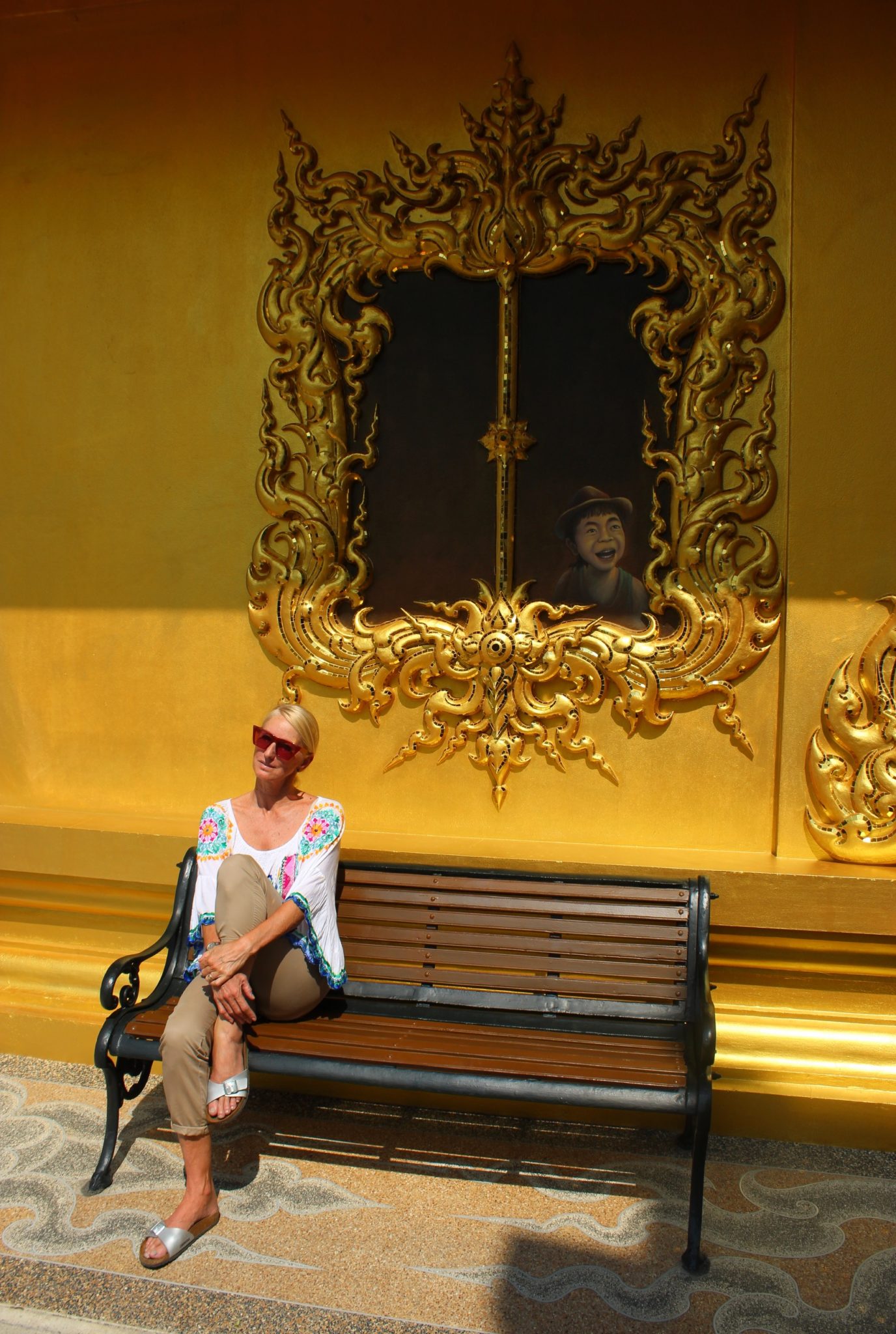 The restrooms (above) are done in gold as a reminder of peoples’ love of riches and possessions. Symbolism is everywhere. 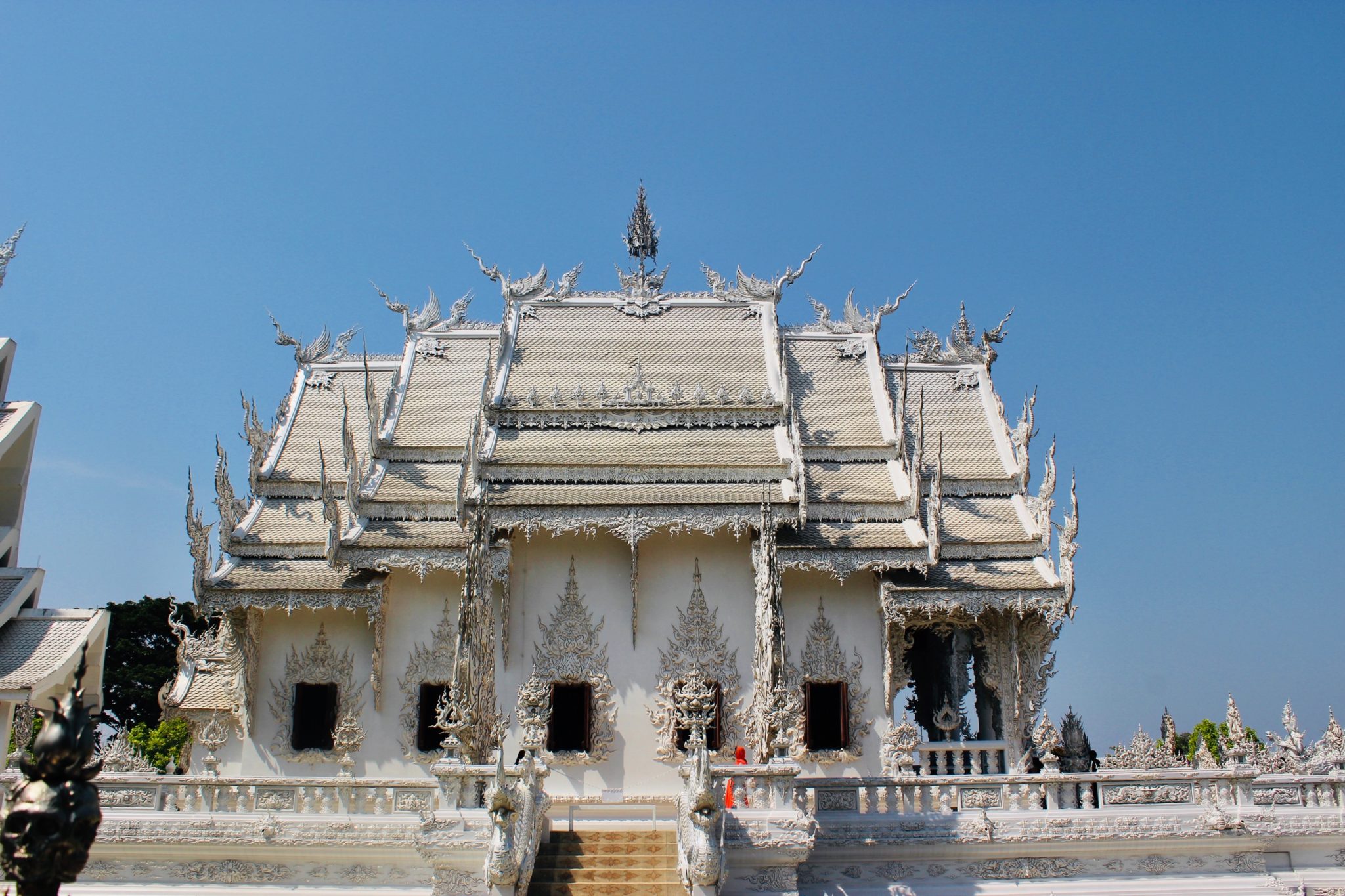 * “Art is the treasure of humanity. Religion belongs to certain races, communities or countries but art belongs to everyone. Everyone can appreciate art. I create food for the soul of all humanity.” (quote extracted from an interview in the Bangkok Post in 2013).

Please remember at all times that before anything else, Wat Rong Khun is a sacred space, a place of worship.

The Wat Rong Khun is located just off Highway 1 (Phahonyothin road) about 15 kilometres South West of Chiang Rai town. The most comfortable way to get there is by private taxi. The ride from town takes about 20 minutes, the fare is between 250 and 300 Baht.

Buses leave from the old bus station near the night bazaar in the centre of Chiang Rai. The trip is 30 minutes, and the fare is 20 Baht one way.

(Quotes marked with a *  were extracted from an interview with Mr. Kositpipat in the Bangkok Post in 2013) 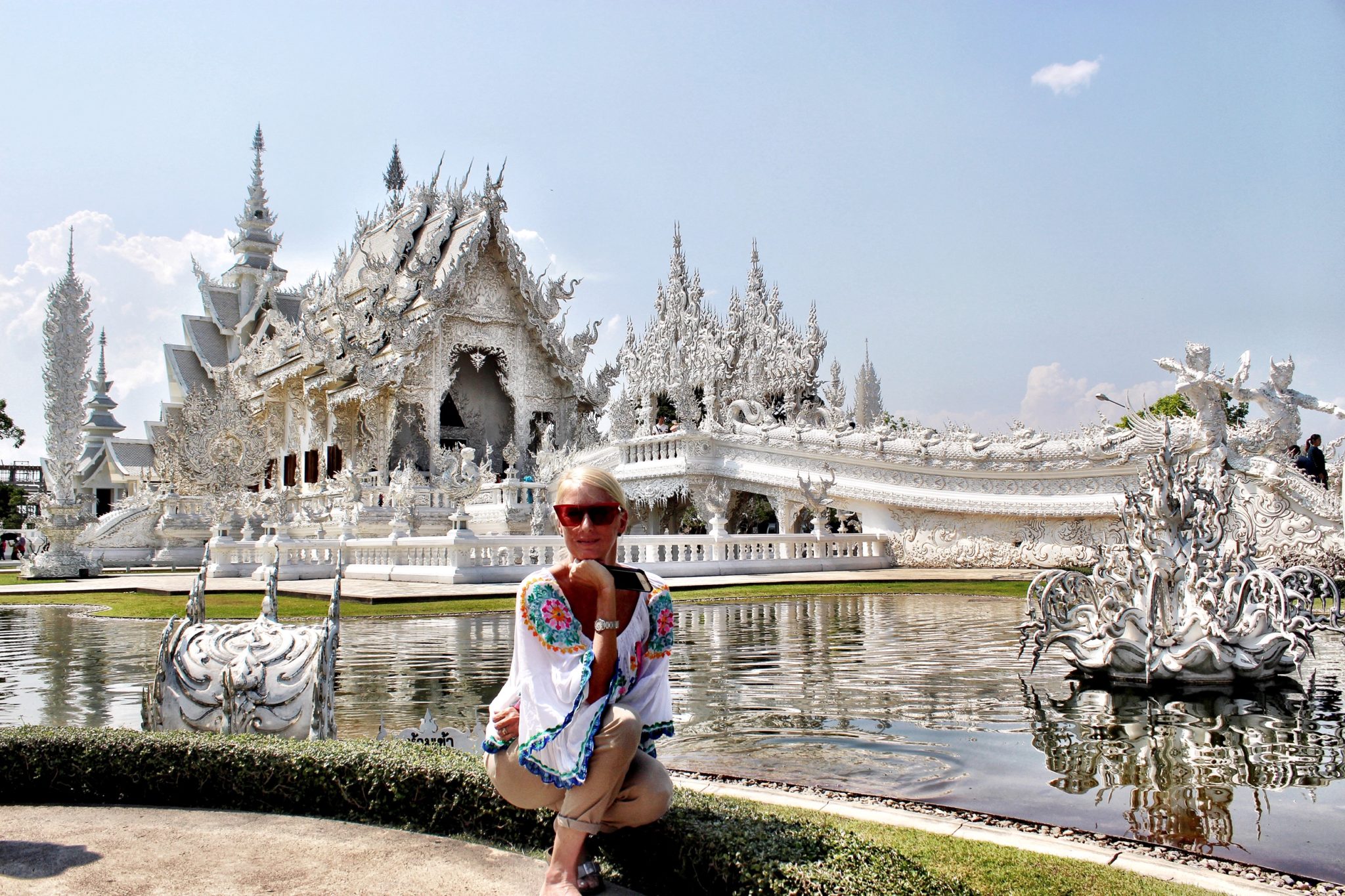 The Maldives ~ prepare your eyes for the unimaginable