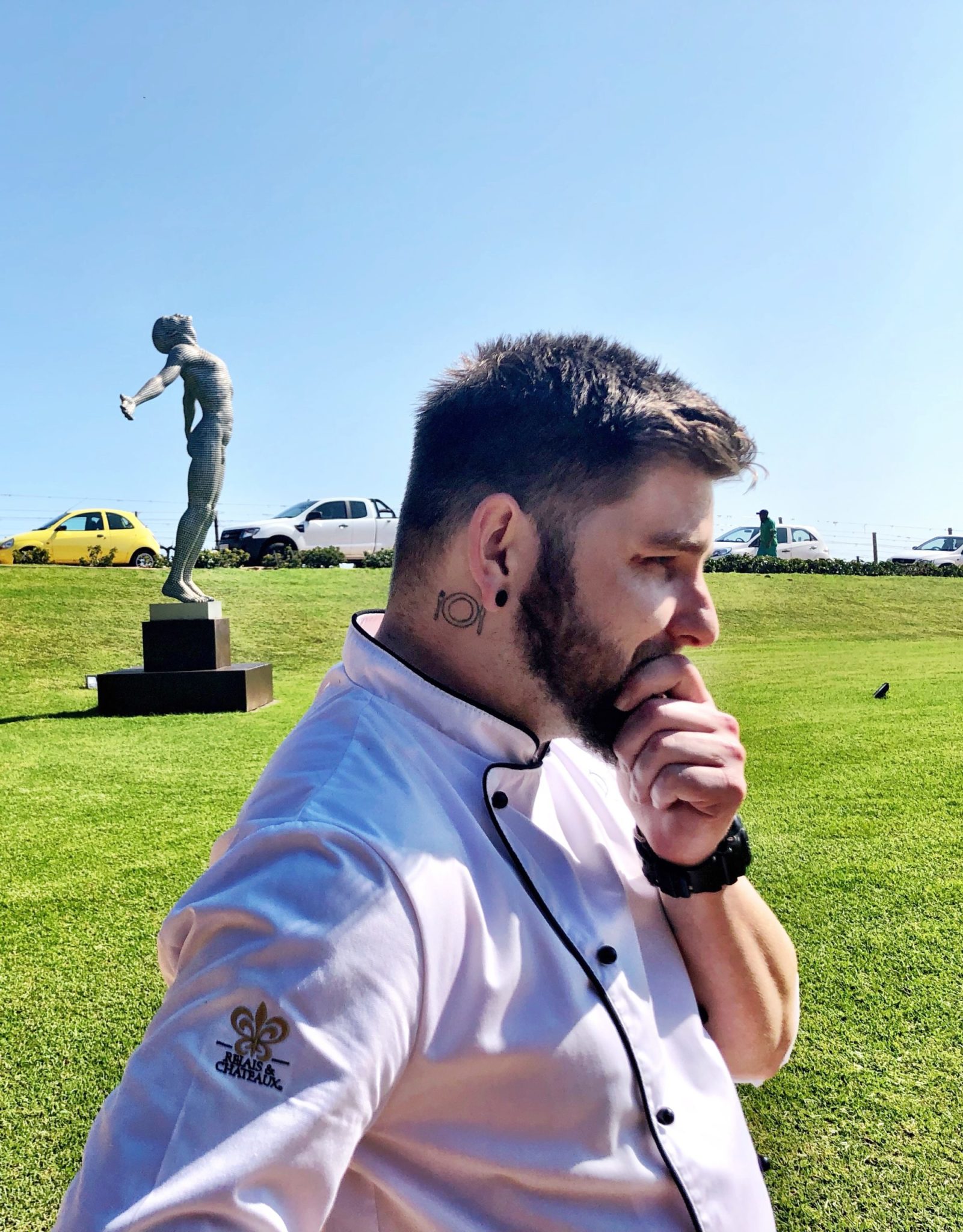 Kevin Grobler is back at Delaire Graff Restaurant in Stellenbosch.  After three years as Head Chef at the celebrated Michelin-starred JAN in Nice, Kevin, 32, is leading an impressive 44-strong team in the very same kitchen where he earned his stripes ten years ago under Executive Chefs Michael Deg and Christiaan Campbell, who remain two of his most valued mentors today. Before and after the initial Delaire Graff stints as chef de partie and then as Senior Sous, Grobler further honed his craft under Michael Broughton and Henrico Grobbelaar at Terroir and Cavalli respectively. 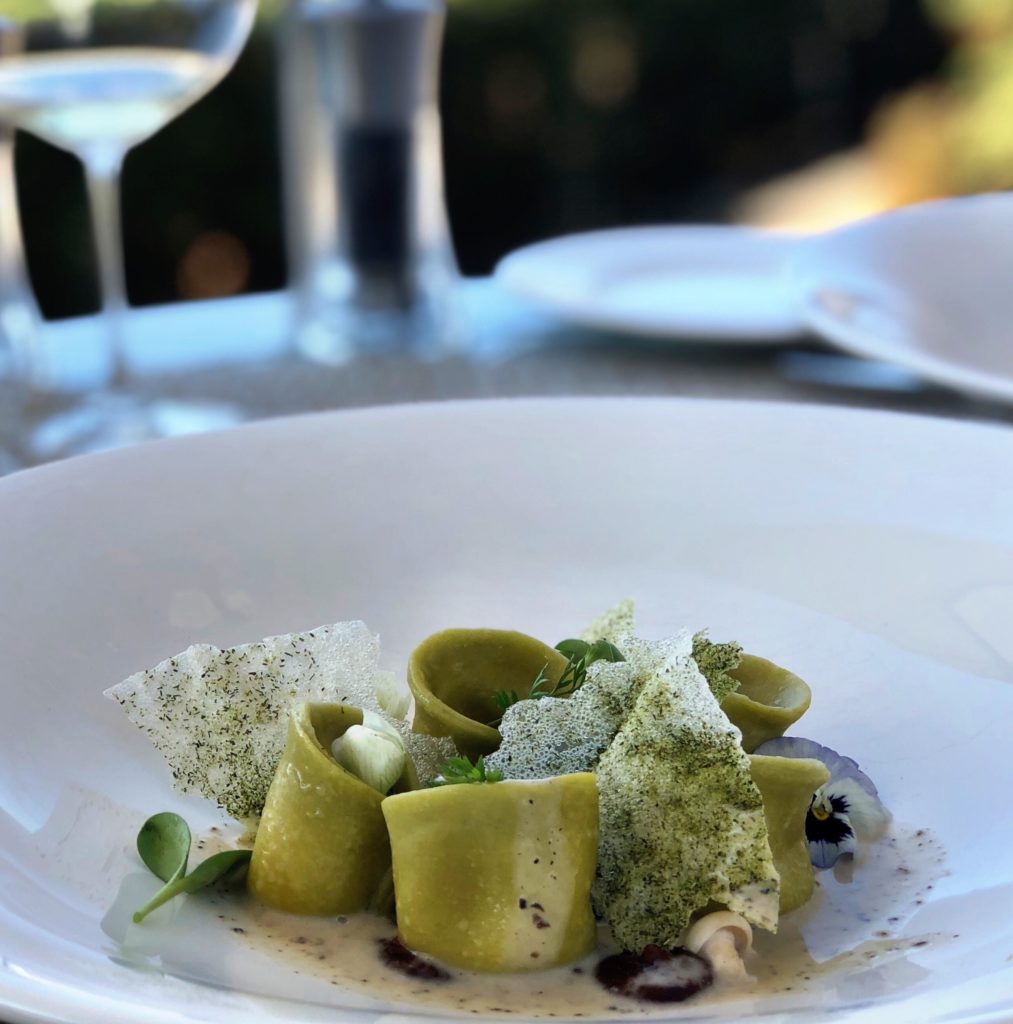 Grobler’s a la carte menu at Delaire Graff Restaurant, described as ‘modern bistro’, caters to all palates and dishes impress with interesting combinations and surprising flavour profiles. Take the spinach tortellini with manchego goats cheese from the nearby Anura estate, with onion and soy purée, a crunchy rice cracker with leek ash (I wish they would bag and sell those!), truffle and coconut velouté and pickled shimeji mushrooms, or the sweet churros served with pistachio crémeux, honey roasted pears, pear gel, and a honey and pear gelato –  sublime. Chef is continuously ideating, researching and experimenting, and his eye for detail means that each dish that emerges from the pass is plated to perfection, challenged only by the unparalleled views from the restaurant terrace.

When it comes to sustainability, Kevin and his crew are uncompromising and in keeping with the farm-to-table philosophy, ingredients are foraged from the estate’s greenhouse or sourced from a local network of ethical small scale farmers. For foodies and connoisseurs, his eleven course tasting menu is inspired by the exquisite notes of terroir-driven wines, from illustrious reds and whites, to delicate sparkling wine and rosé, expertly crafted from vine to bottle by viticulturist Kallie Fernhout and winemaker Morné Vrey.  Since inception in 2008, the exclusive property on the lush crest of the Helshoogte Pass has made its mark as one of the most awarded estates in the country. British Master of Wine Tim Atkin dropped an astounding 97 score on the Laurence Graff Reserve 2015, cementing it as the top Cabernet Sauvignon in South Africa, and in September the elegant art-filled Winery was nominated for a 2019 Wine Enthusiast Wine Star Award in the new ‘Winery Experience of the Year’ category, one of only five wineries in the world to receive this honour.  The Banghoek, a Cabernet Franc based blend, The Banghoek, was released on 1 December 2019 and is touted as the finest celebration of the Estate’s majestic surrounds. (The Laurence Graff Reserve 2015 and The Banghoek 2016 are available from the Delaire Graff Wine Lounge).

Christmas is around the corner and if chef’s summer menu is anything to go by, the festive feasting will be next level, another exceptional Delaire Graff experience. www.delaire.co.za / 021 885 8160

Q1 Where did you grow up and were there any cooks in the family who influenced you? I grew up in Kimberley and Bloemfontein and to be honest, my mom’s cooking wasn’t the greatest. I decided to experiment in the kitchen and teach my brothers about food, although they don’t love it as much as I do.

Q2 When did you know you wanted to cook professionally- what influenced that decision?  I did home economics at school and I was pretty good at it. Then a few reps from a chef academy came to do a demo at our school, and the rest is history as they say.

Q3 You have worked with some of the best chefs in South Africa, if not the world. Can you share important lessons gleaned from them? Michael Broughton (Terroir) was the first chef I worked for at age 19- he was a big influence when it came to work ethic and how to treat staff. Others include Chef Christiaan Campbell (Delaire Graff) on sustainability, Chef Michael Deg (Delaire Graff) on how to facilitate a big team and manage busy service, and then of course Jan Hendrik van der Westhuizen (JAN) on creativity.

Q5  Describe ‘modern bistro’?  While many see the Delaire Graff Restaurant experience as fine dining,  we prefer the description to be ‘modern bistro’. Our environment is informal, relaxed while still delivering with outstanding ingredients and finding ways to make them shine in the cuisine.

Q6: If you were asked to create a set menu using a single ingredient- what would it be and why? I would use a white fatty fish as it can be changed into a wide variety of things-  it can be grilled, sous vide, turned into a farce and the list is endless, plus I enjoy working with fish its very calming for me.

Q7: Do you scream in your private life as much as you do in the kitchen?  I don’t really scream in my kitchen unless I absolutely have to and its usually only because we are very busy and the kitchen gets too loud, and no I don’t shout at home at all.

Q8: Do you enjoy cooking at home & use that platform as base ground for some of your new inspirations & creations in the kitchen? At the moment I don’t do much cooking at home, but when I do get a chance I play around with ideas and invite some of chef mates over to do a bit of sampling and brainstorming.

Q9. What was on the DG Christmas menu?  The Christmas menu was laced with nostalgia for me, throwing back a little to a few of my childhood memories. I also worked in a few Cape, British and American traditional dishes with which local and international guests identified:  a fish salad starter using a range of fresh ingredients sourced on the estate and from local suppliers, drizzled in a dressing with Delaire Sunrise Brut MCC as one of the ingredients to give it a festive effervescence. The main course was turkey done sous vide with cranberries and chestnuts and Yorkshire pudding as a side, a classic from when I was a boy. For the second option I did a Cape Malay fish dish with bokkom pate and béarnaise sauce and gooseberries. Dessert was apple tarte tatin with streusel and eggnog.

Q11  Given the choice, is there any celebrity chef that you would actually pay to work under & why? Marco Pierre White, the first and youngest British chef to be awarded three Michelin stars. He was the original bad ass rock star chef and with regard to his views on food and the industry he has always been way ahead of his time.

Q12 What advice do you have for aspirant chefs?  Keep your head down and work hard. Don’t try and push for money the first few years of your career- rather aim for knowledge and the rest will follow.