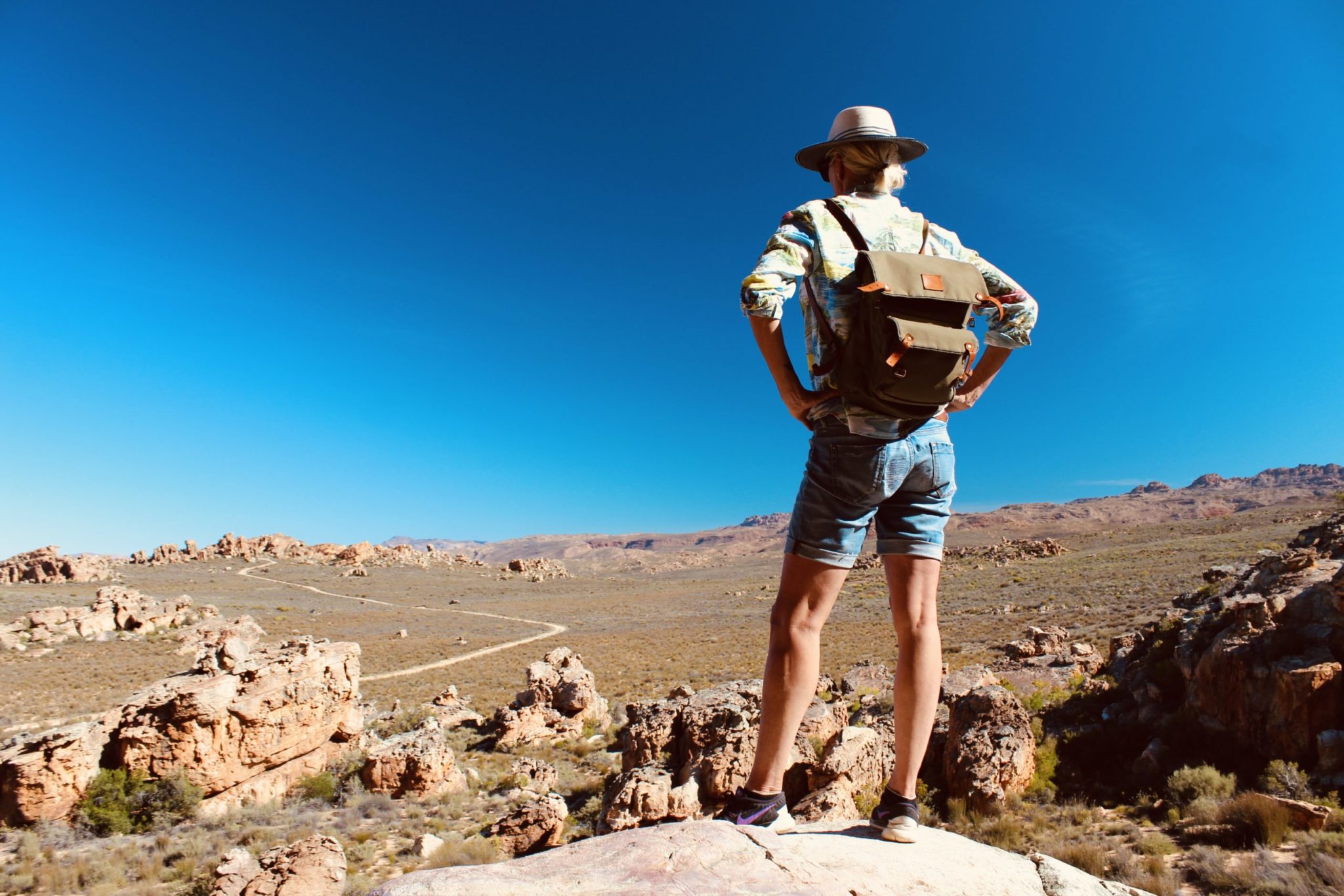 There’s not much to beat a tramp through the natural world – you, your thoughts, the great outdoors and nothing to run interference. Today more than ever, conscious detachment is a thing and people are heading for the hills to hit refresh.  If you’re looking to reset in nature and if you relish immersion in untamed territories, the Cederberg has your name all over it. 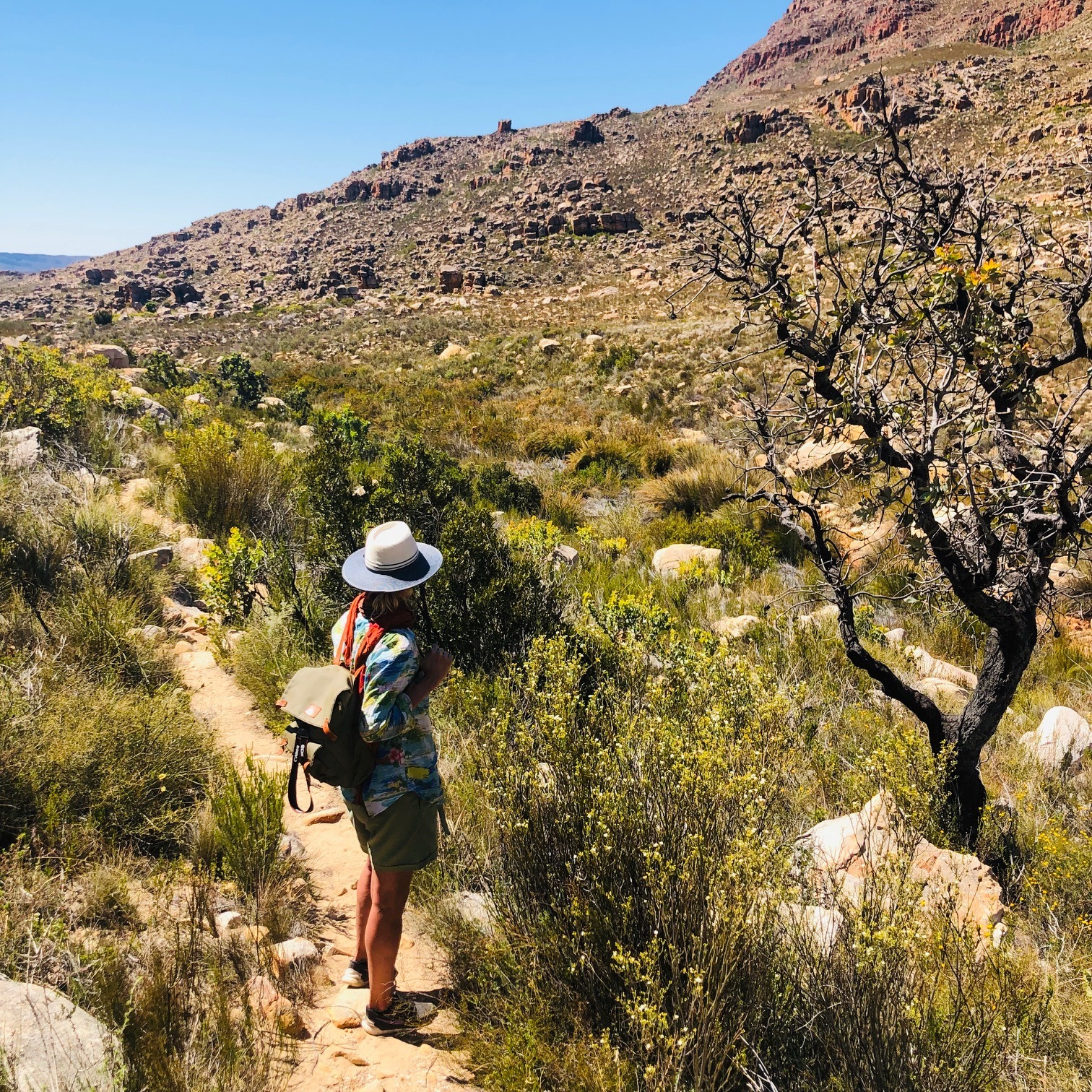 A week after I did the Glamtrails walks with Tim Lundy, I went on another hike in an area in complete contrast to the Hermanus highlands: the Cederberg Wilderness Area.

One of the most undisturbed environments of Southern Africa, the Cederberg lies north of Cape Town, a sizeable region encompassing 71,000 hectares of lowland terrain, craggy mountains and spectacular topography.  Depending on where you’re headed within the various conservancies, it’s a two to four hour drive from the CBD, and in actual distance, up to 250 kilometres into the heart of wildness. The Cederberg is a place of raw and brittle beauty, astonishing landscapes and extremes. 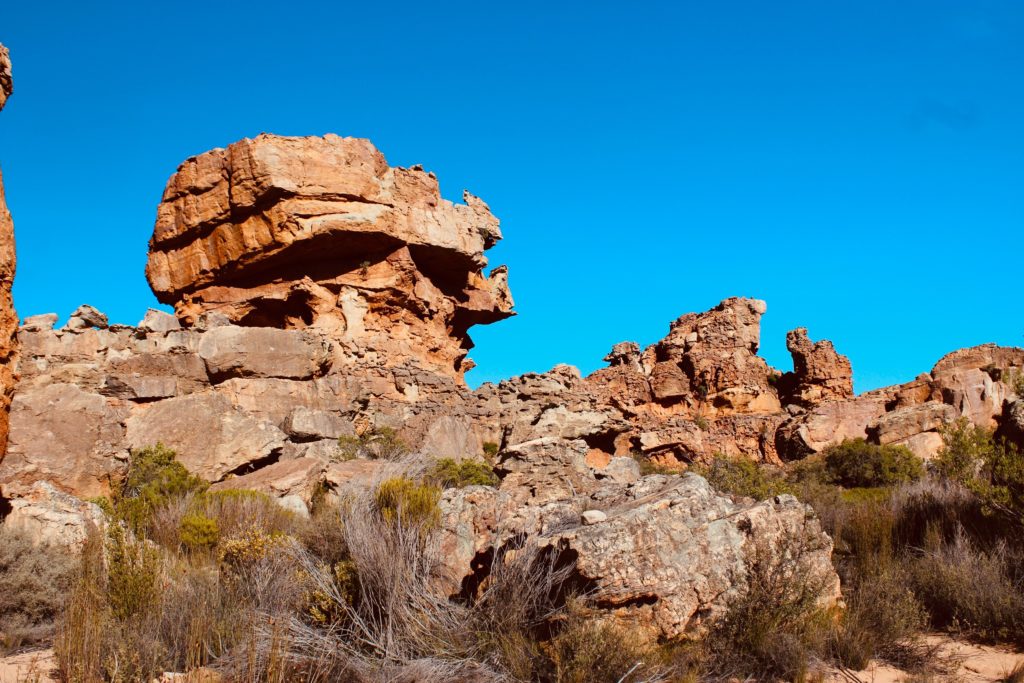 Named for the Clanwilliam cedar, an endemic, protected species found mostly on the higher mountain slopes, the Cedeberg is nirvana for naturalists, cyclists, mountaineers, photographers and hikers. One of the best places from which to explore it under foot is from Kromrivier Cederberg Park (KCP), a goat farm-turned-getaway that has been welcoming visitors since the 60’s. Over the last few years the entire property, from farmhouse to guest accommodations, has undergone a stylish overhaul too. The old farmhouse is in a new position entirely, with an info centre and restaurant,  a small curio shop and a supply store selling basic provisions and artisanal goods.  Available more recently is a smooth shiraz made from grapes grown on site, and there’s beer that’s been crafted by the Niewoudt sisters at their microbrewery, the first one to be established in the Cederberg. 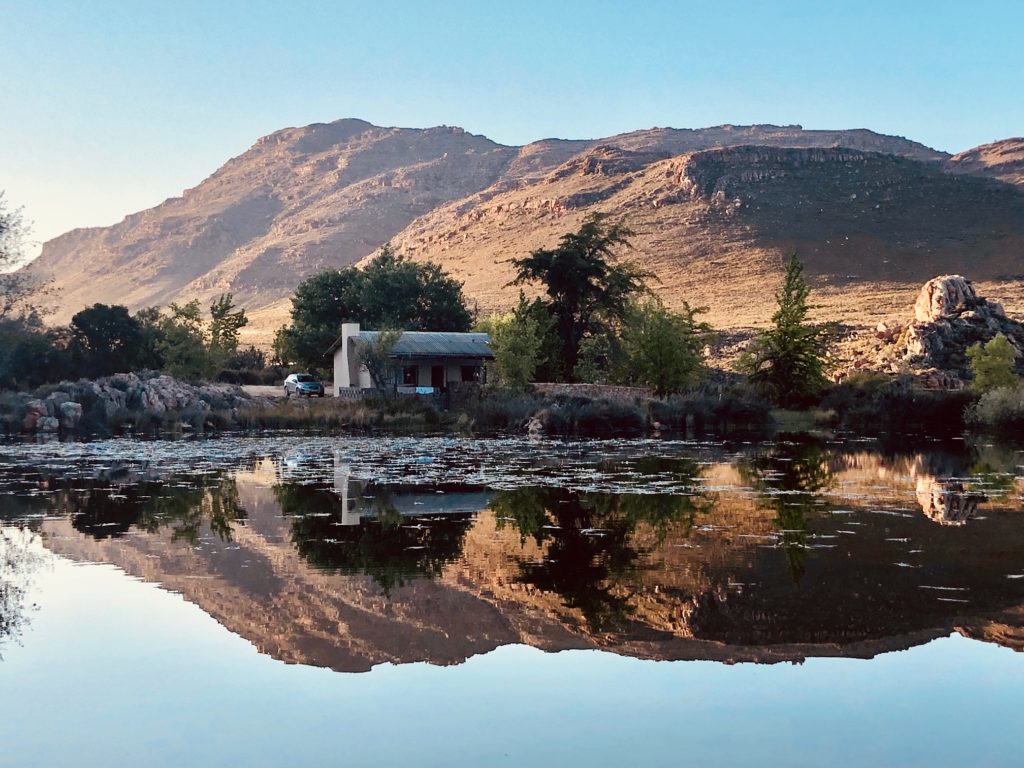 Tafelberg as it is now-to be demolished soon

(*note that Tafelberg will be demolished sometime this year, to make way for new accommodations – he new cottages have been stylishly designed and decorated, and blend in well with the environment.)

A number of easy-going trails can be accessed from Kromrivier. The popular hike to Disa Pool – 5km there and 5km back – takes about 3 hours and is probably one of the most well-known, having been on the Cape’s hiking hotlist for decades. Getting to it is a five-minute drive from Tafelberg cottage at KCP along a sandy jeep track that takes you as far as you can go before the road becomes too difficult to navigate by car. 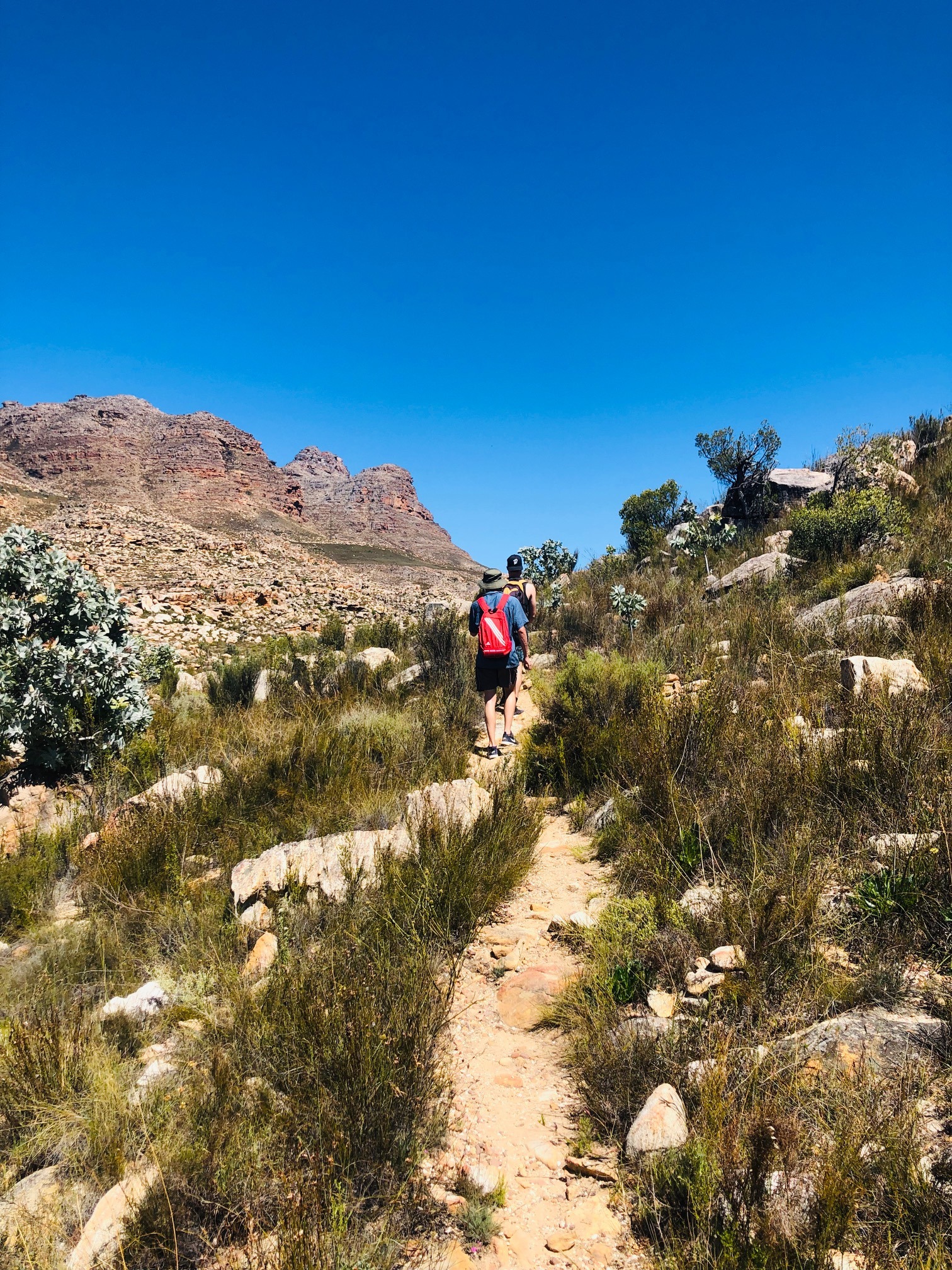 Easy going, all the way

From there it’s a short trek to the shallow part of the river that must be crossed to reach the main trail on the opposite side.  The narrow walking paths are currently in the process of being cleared and widened I’m told,  by teams from CapeNature and Kromrivier and this will obvs make the going easier. 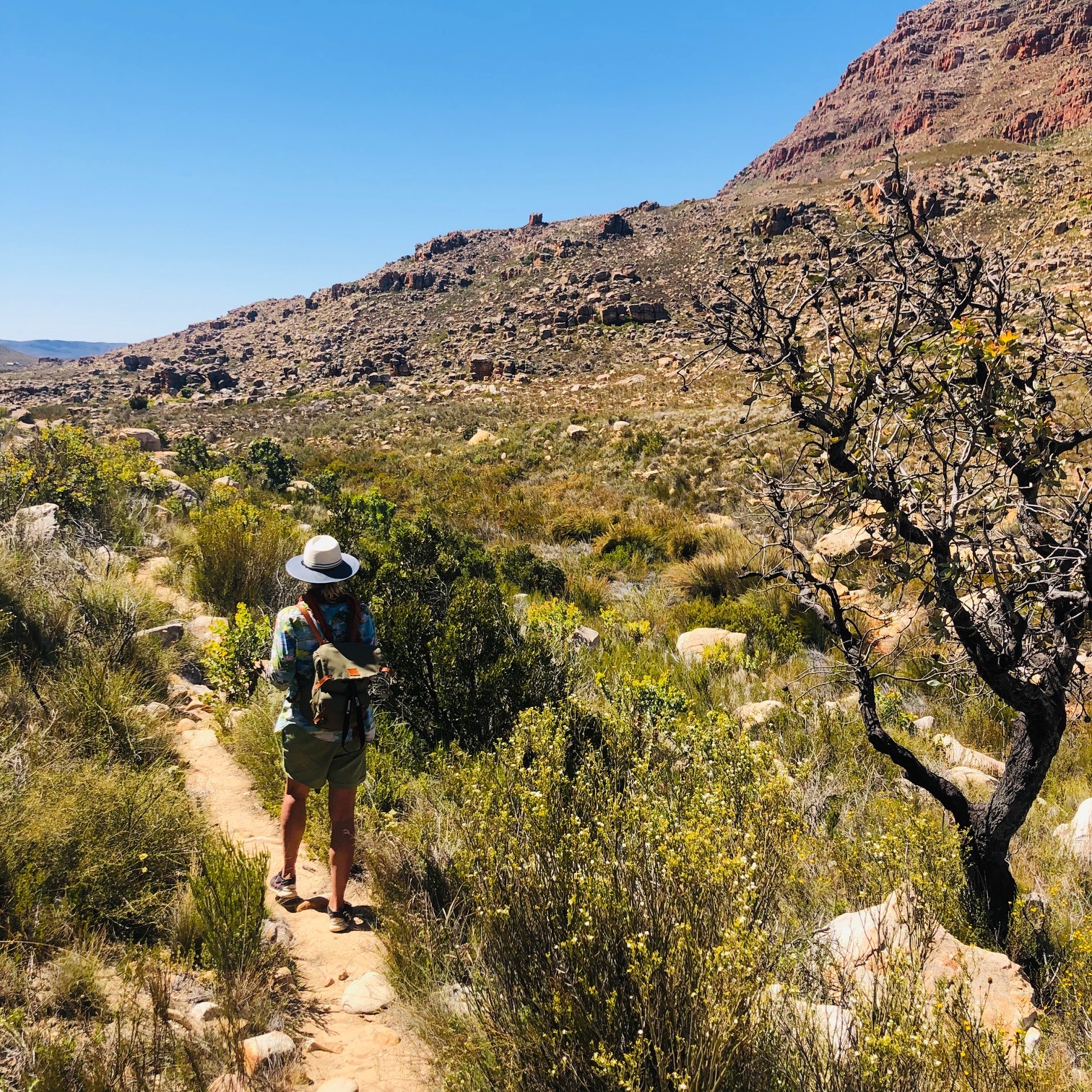 The track cuts through indigenous fynbos and stays parallel to the river that’s never more than twenty metres away. 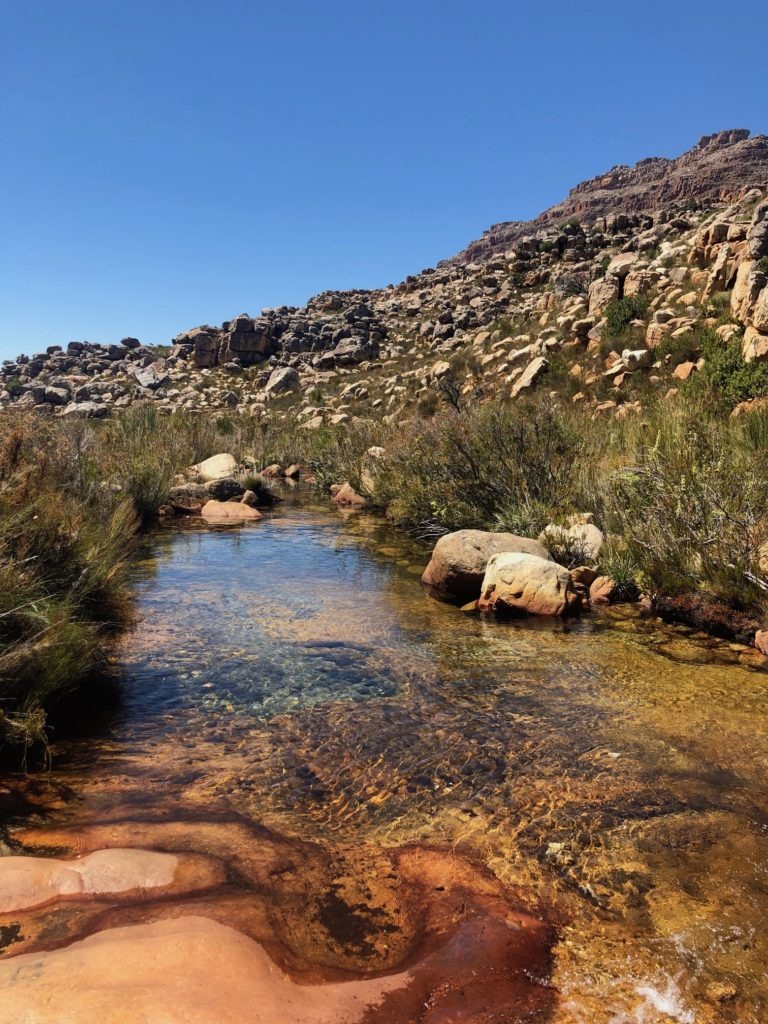 the pools- cool and enticing

In summer when temperatures peak at 35 degrees before midday, the glassy rock pools are an irresistible distraction with smooth, flat boulders – the perfect snooze and picnic plateau. 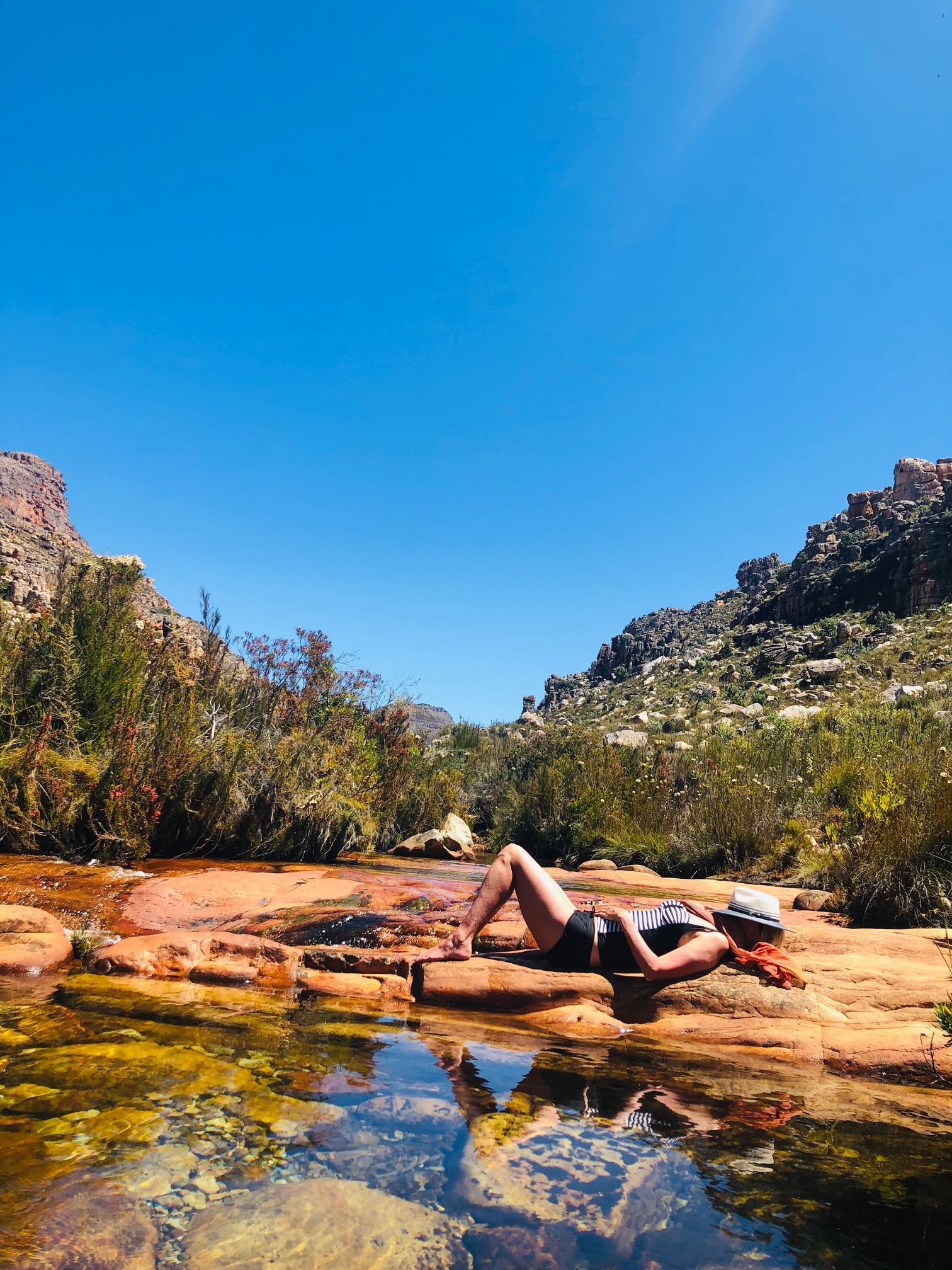 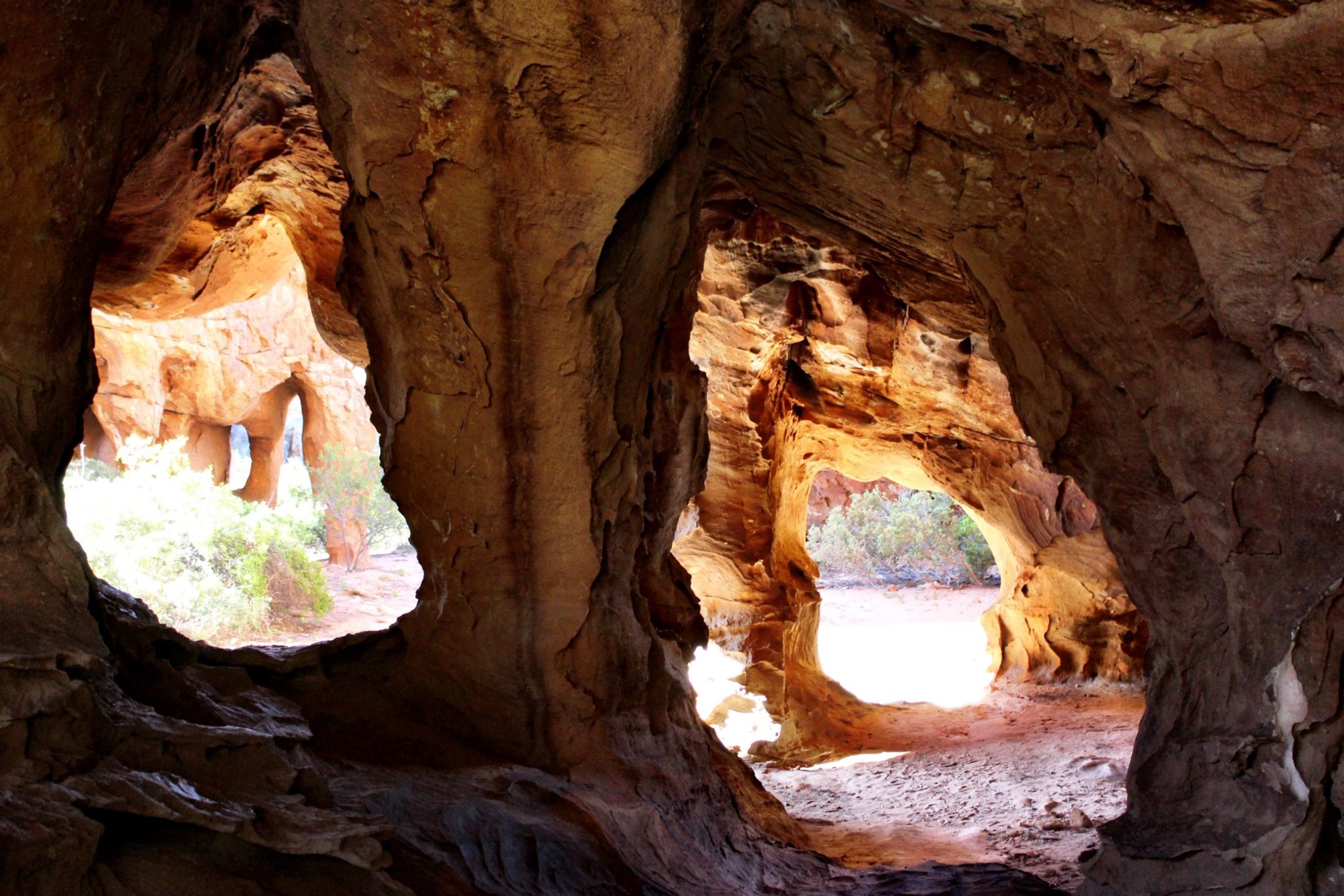 Kromrivier hovers on the border of Truitjieskraal and Stadsaal, adjoining the Matjiesrivier Reserve.  A permit gets you into the reserve, available from the Kromrivier office. Once through the gate (you’ll be given the code for the combination lock when you buy your permit), marker boards direct visitors to the parking area and once there, a short climb up leads to an incredible rock art installation estimated to be about 1,000 years old. 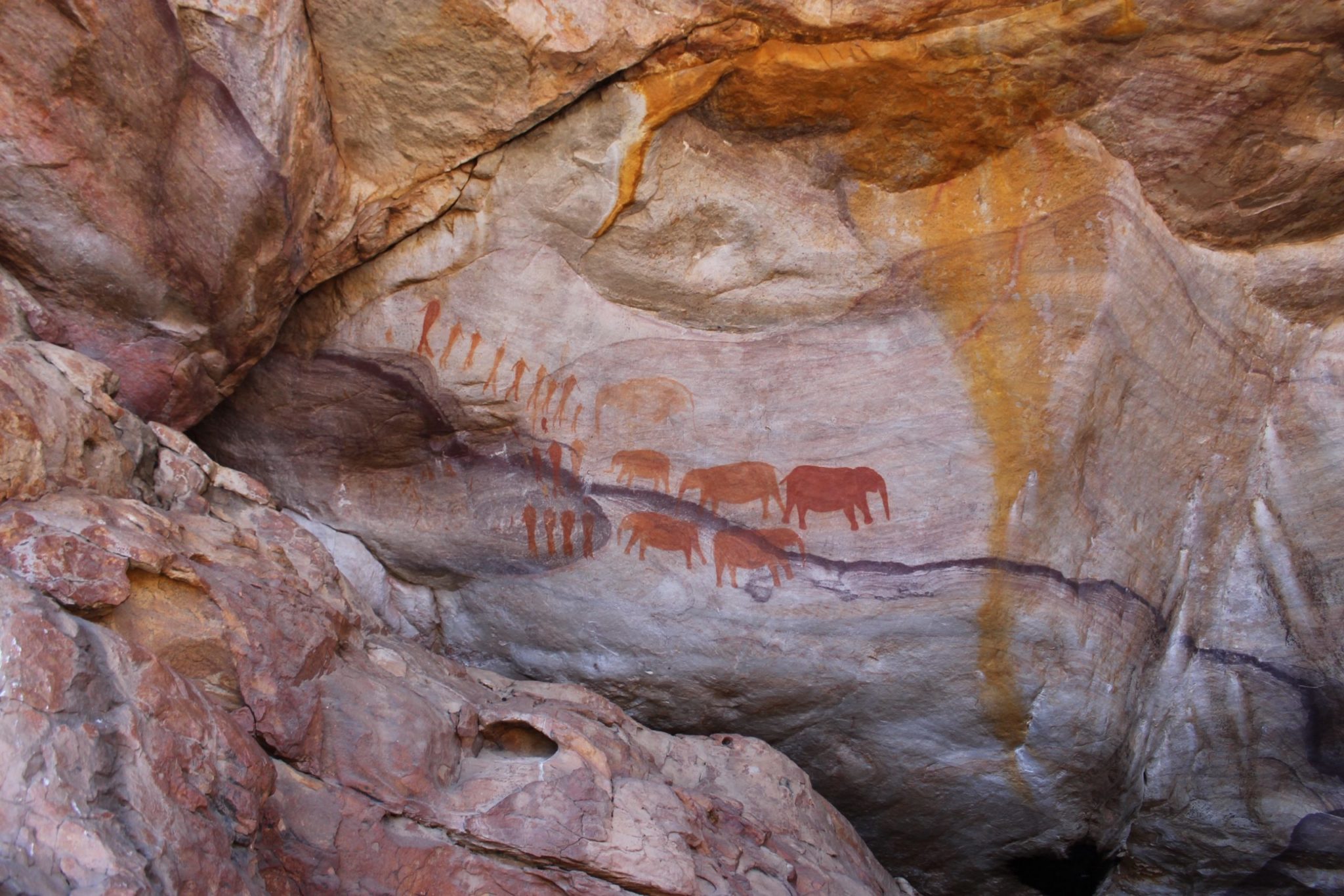 The scene depicts a group of people and a herd of elephants, which likely means these gentle giants once roamed through these lands.  The site has a sacred aura about it and the sign below it encourages visitors to  behave as if they were at a place of worship. The Cederberg is rich in these types of rock art sites with around 2500 documented, all priceless renderings from as far back as 8,000 years ago that tell the silent stories of the San and Khoi Bushmen who lived in the area for over 500 000 years before Settlers disturbed the status quo. According to experts like cartographer Peter Slingsby, Southern Africa probably has the richest legacy of ancient rock art in the world. 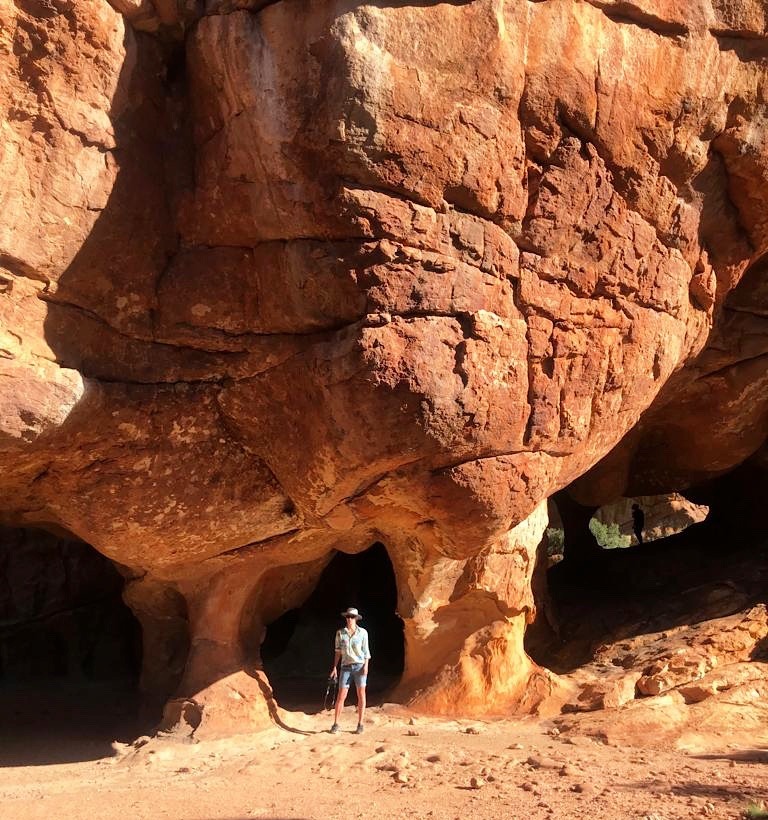 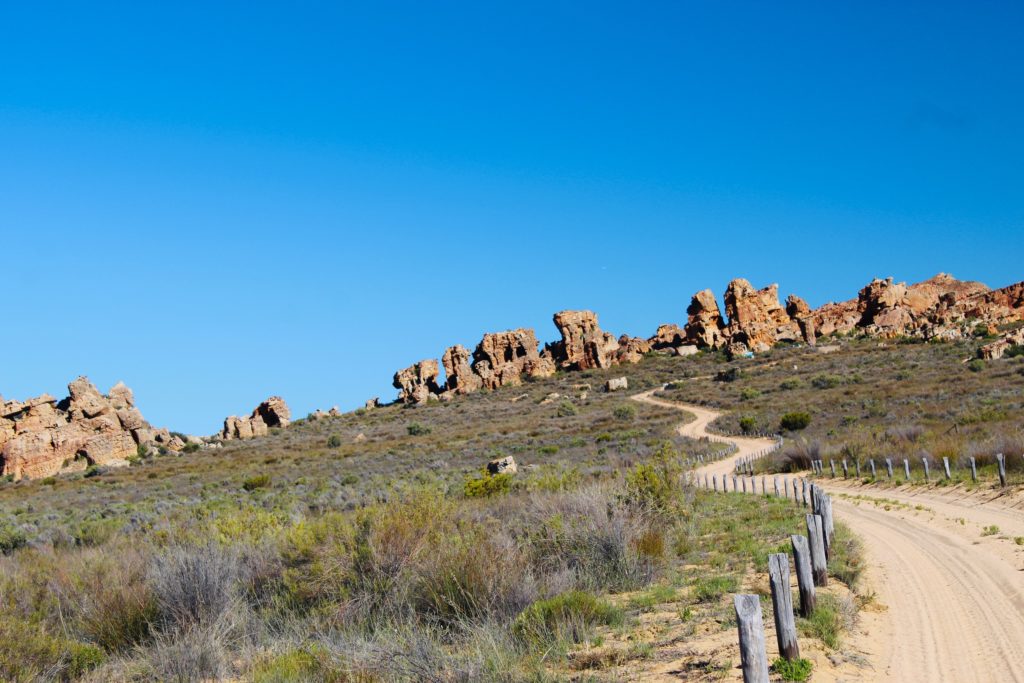 The track from the rock art to the Stadsaal rock cluster, seen on the horizon (it’s a 20 minute walk on soft sand)

Across the veld it’s fifteen to twenty minute walk – quite an effort on the loose sand – from the elephant art to Stadsaal which means city hall in Afrikaans. 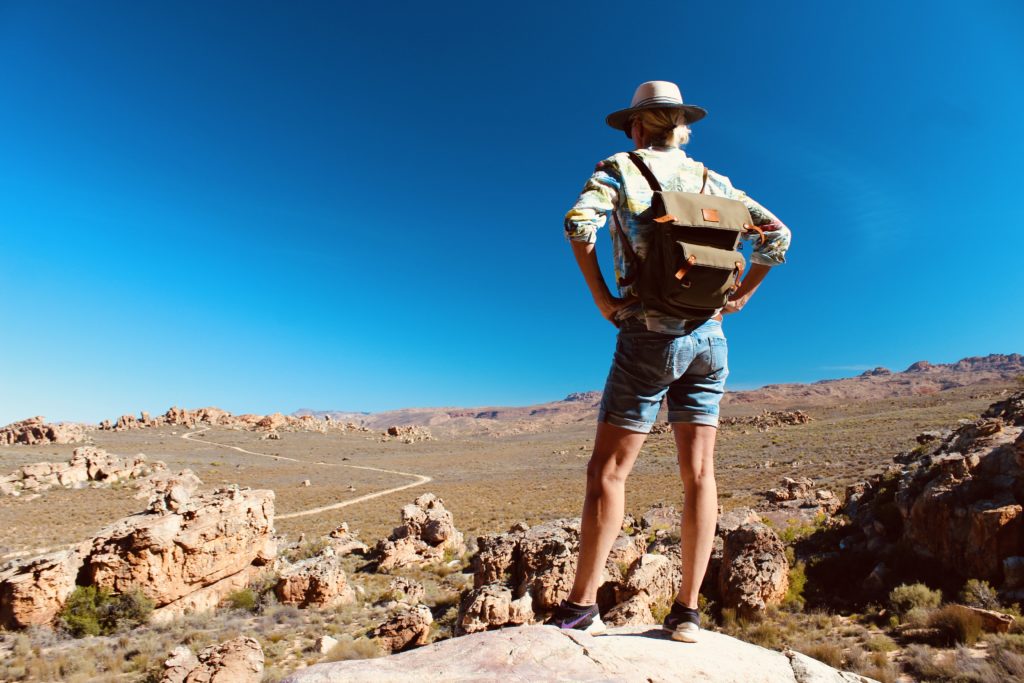 looking across to Stadsaal and the path leading up to it

Silhouetted against against a vivid blue sky, the fantastical rock cluster houses an open air cave system, so named because of a National Party bosberaad that was held there pre-1948. In fact the caves were used by locals as a gathering place way before that. Across from that sacrosanct outdoor gallery, clearly visible against the sapphire sky, Stadsaal is a fantastical rock cluster that houses an open air cave system, made famous after a National Party bosberaad held there pre-1948. The caverns, framed and supported by bizarre looking pillars that look like something Antoni Gaudi might have dreamed up, were in fact used long before that time as a meeting place for local tribes and community leaders. Testament to these gatherings are a number of signatures scrawled across the main cavern wall, dating as far back s the 1800’s. allow at least 30 minutes or more to explore the airy warren. 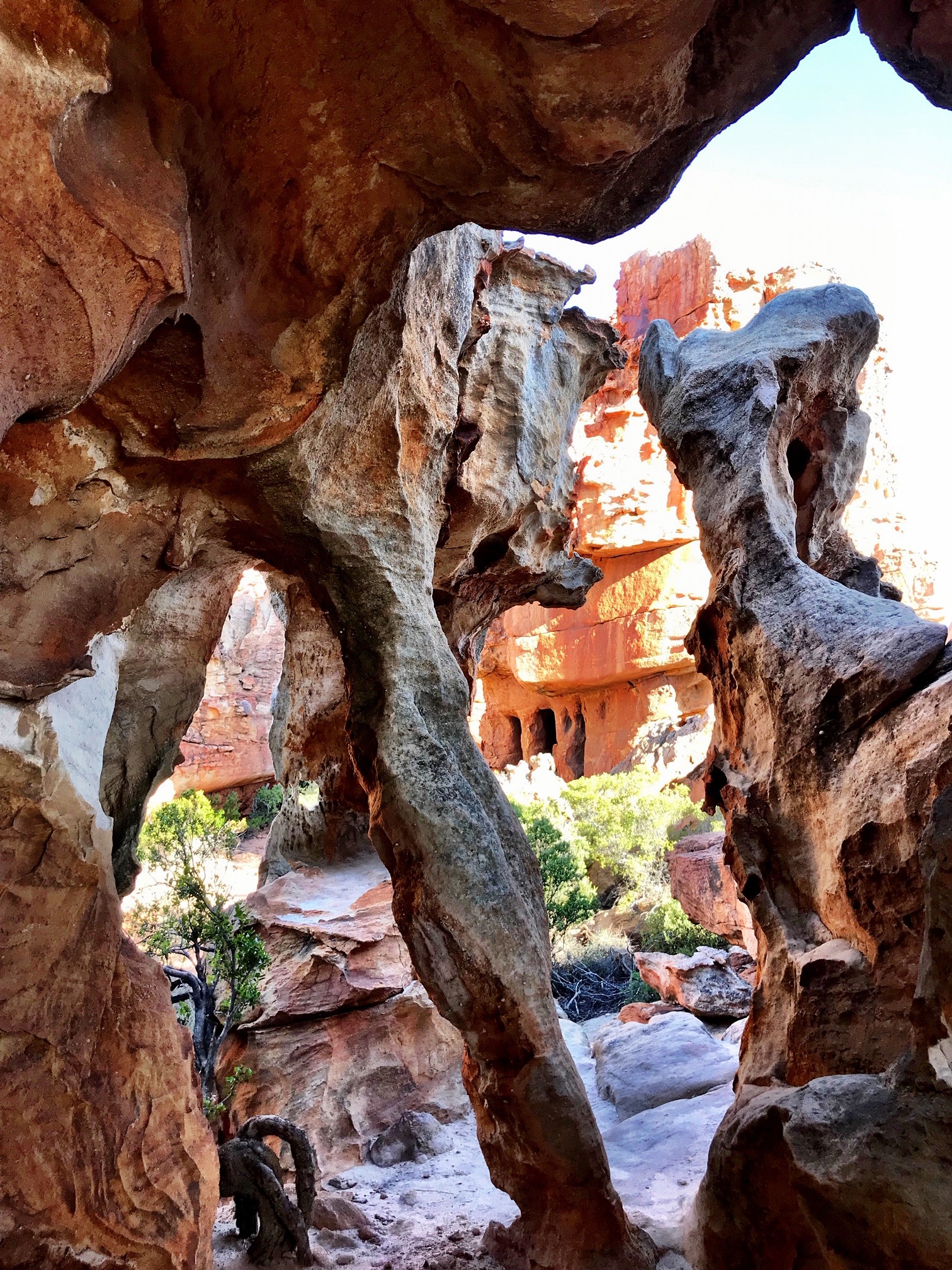 The geology and formations will floor you. 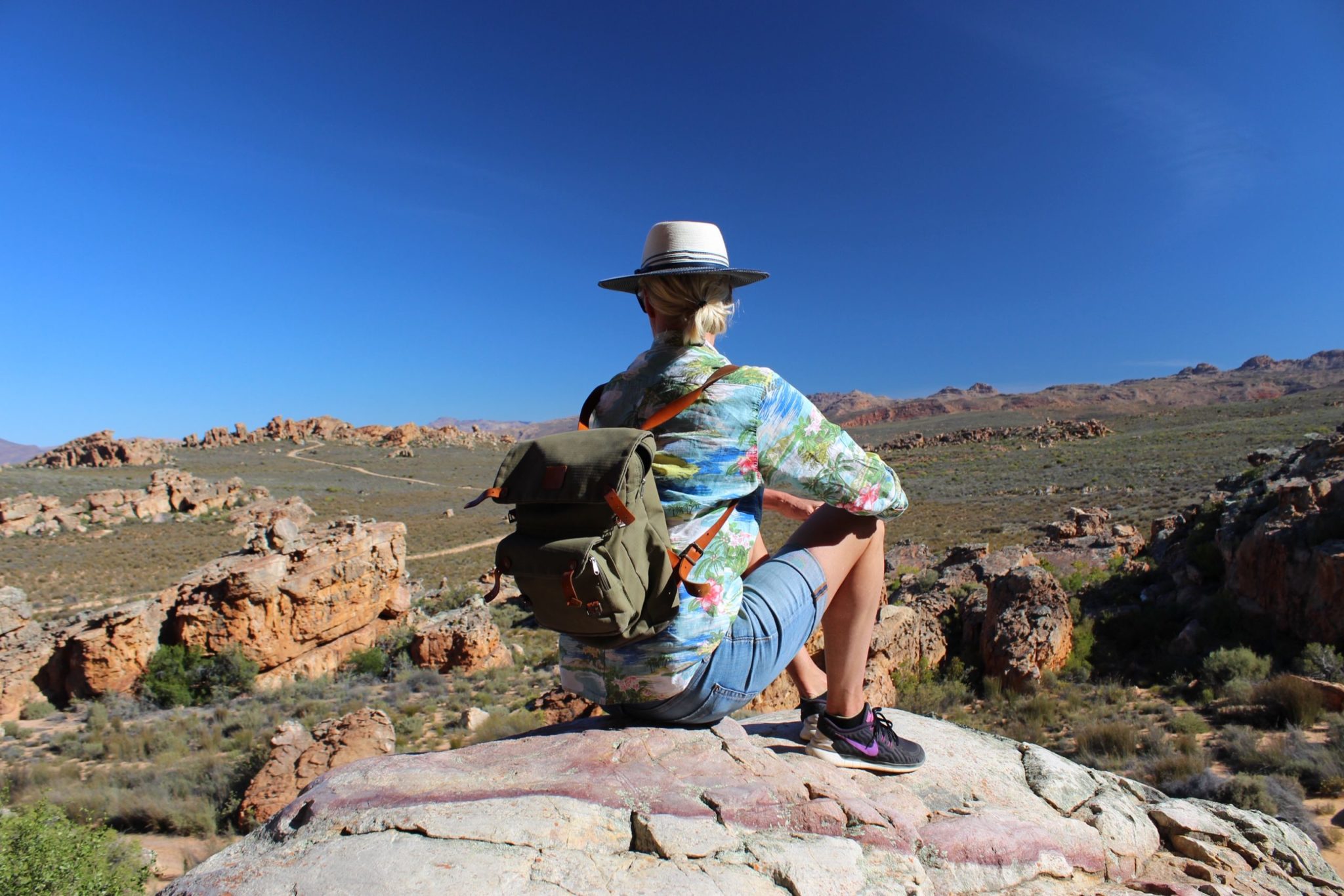 Kromrivier plays a key role as it is a Cape Nature Contract Reserve (the Kromrivierkloof Nature Reserve). In turn it forms part of Cederberg Conservancy in which Kromrivier provides an all-important link between the Matjiesrivier Nature Reserve and the Cederberg Wilderness Area.

Be sure to add the Cederberg to your bucket list.

Permits: R50 for adults and R30 for kids, obtainable from the Kromrivier Cederberg Park (KCP) office- if you’re staying at KCP you don’t need to pay.

Do a wine tasting at the Cederberg Cellars

Getting there: Take the Algeria turn off from the N7

Hiking tip: remember to set out early in summer & in winter always be prepared for sudden changes in the weather 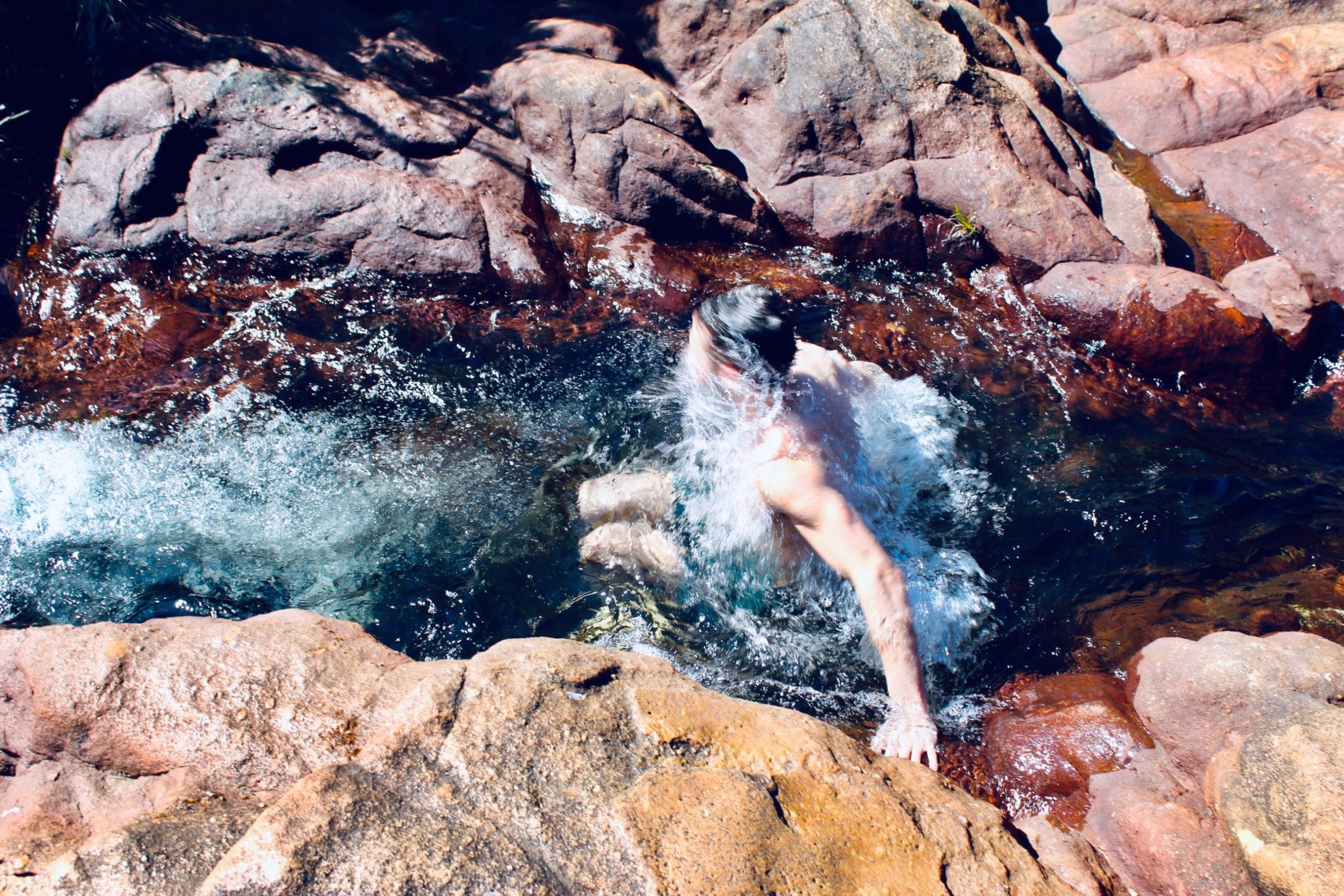 Finding your zen in the simplest ways

Pastries & the Parisian pâtissier at Truth in...