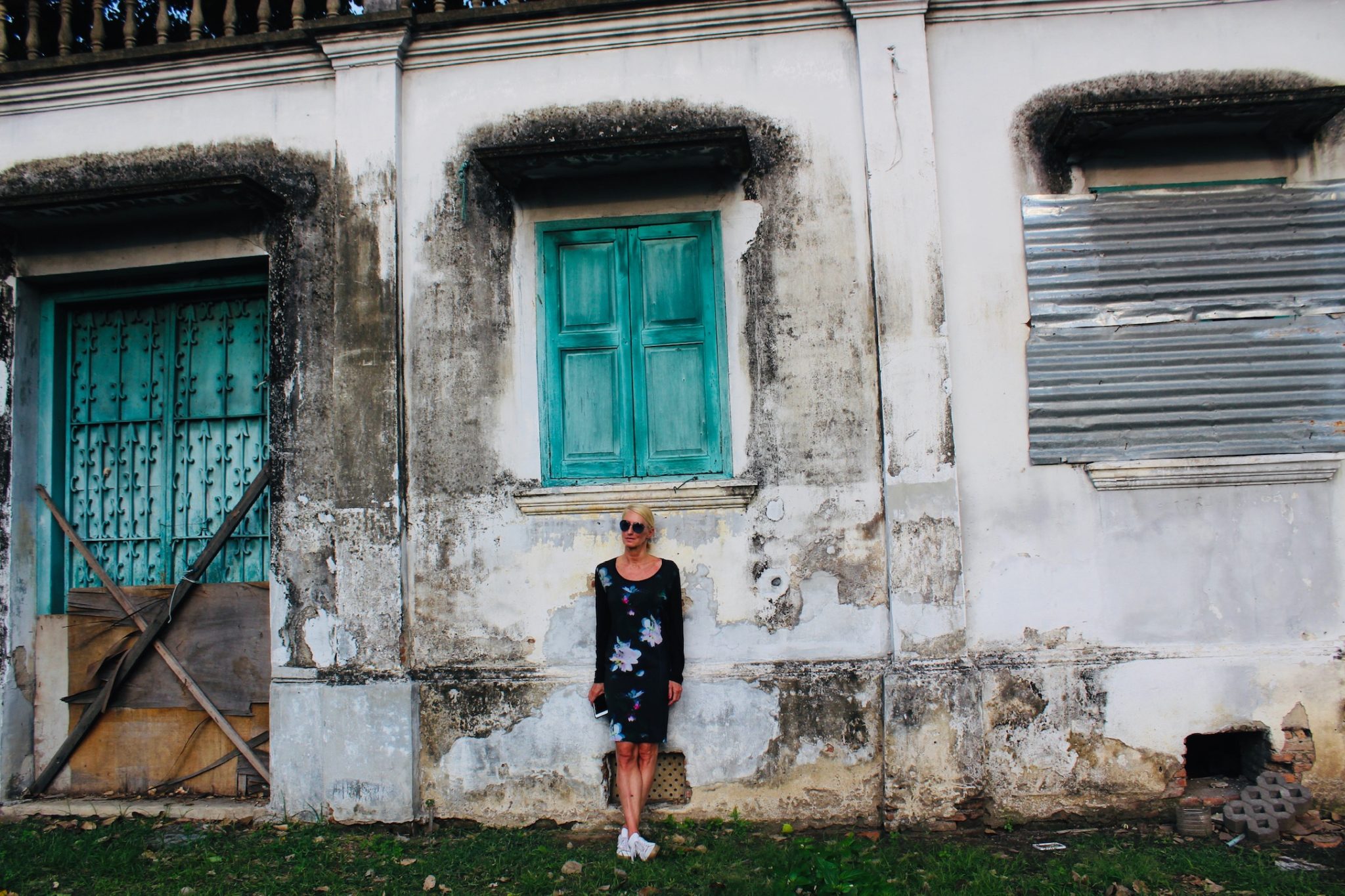 Thailand is open, all Covid protocols observed and as usual, the anticipation of amazing experiences is real. On my last trip two years ago I explored Chinatown, a lively neighbourhood in Bangkok’s Samphanthawong District, well worth a few hours immersion.

Trawl through any major global capital and you’ll encounter lively pockets of ethnicity that differ from the native population and offer a delightful peek into the traditions and customs of other nations.  As the Chinatowns of the world go, Bangkok is the world’s biggest and best – not often one gets to write that. It’s a heady microcosm of Thai-Chinese life that has the exploring crowd in their element. Modern Chinatown lies sprawled between Yaowarat Rd- the main artery-and Charoen Krung Road, is bordered by the Chao Praya River to the south. After Old Town, it is Bangkok’s second oldest quarter and has been the Thai- Chinese community’s trade hub for some 200 years.

A BIT OF THE BACKSTORY

About 200 years ago the Chinese began peddling their rice to neighbouring Siam, now known as Thailand. Over the years, famine, war, burgeoning trade opportunities and better life prospects prompted a steady flow of immigrants to Thai shores – blue collar workers, merchants and artisans.  Once in Thai territory they established a thriving settlement, with Royal permission. The original community that was relocated in 1782 to make way for a temple continued to thrive and today that legacy lives on. 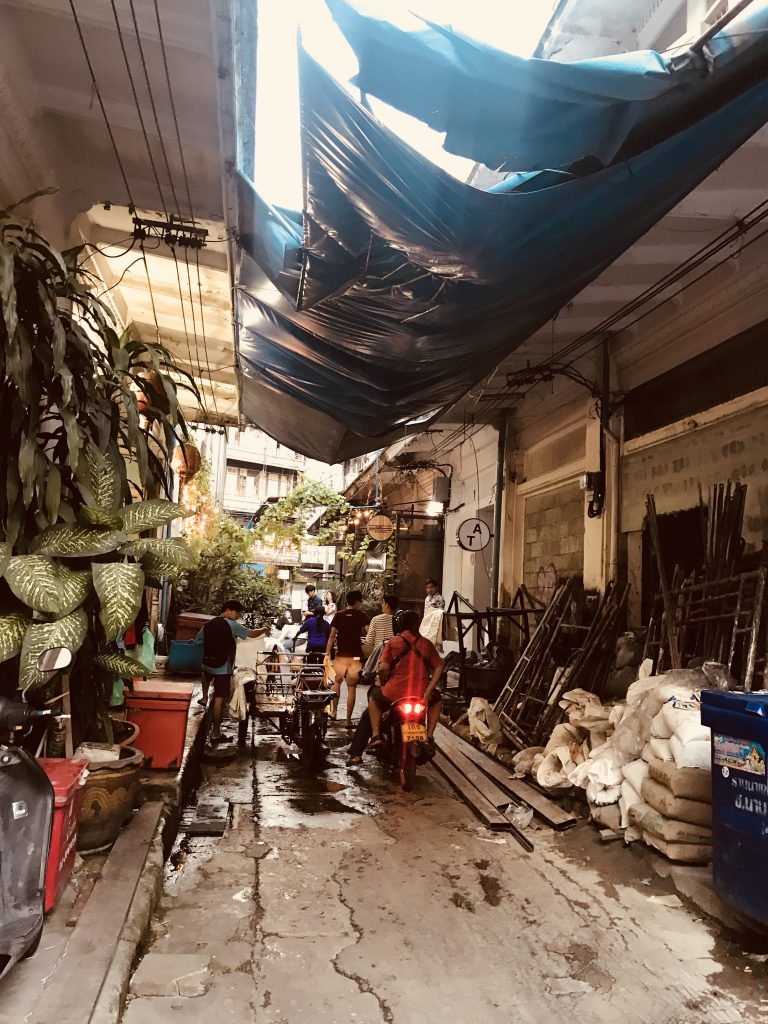 Soi Nana, a narrow side street

Over the past twenty years Chinatown has seen a reputational upswing with the elimination of opium dens, brothels and gambling houses. A new wave of style-centric gallerists, artisans, architects, designers and chefs have moved in and upped the social ante with a slew of stunning venues that have become the hangouts of choice for creatives and aficionados. 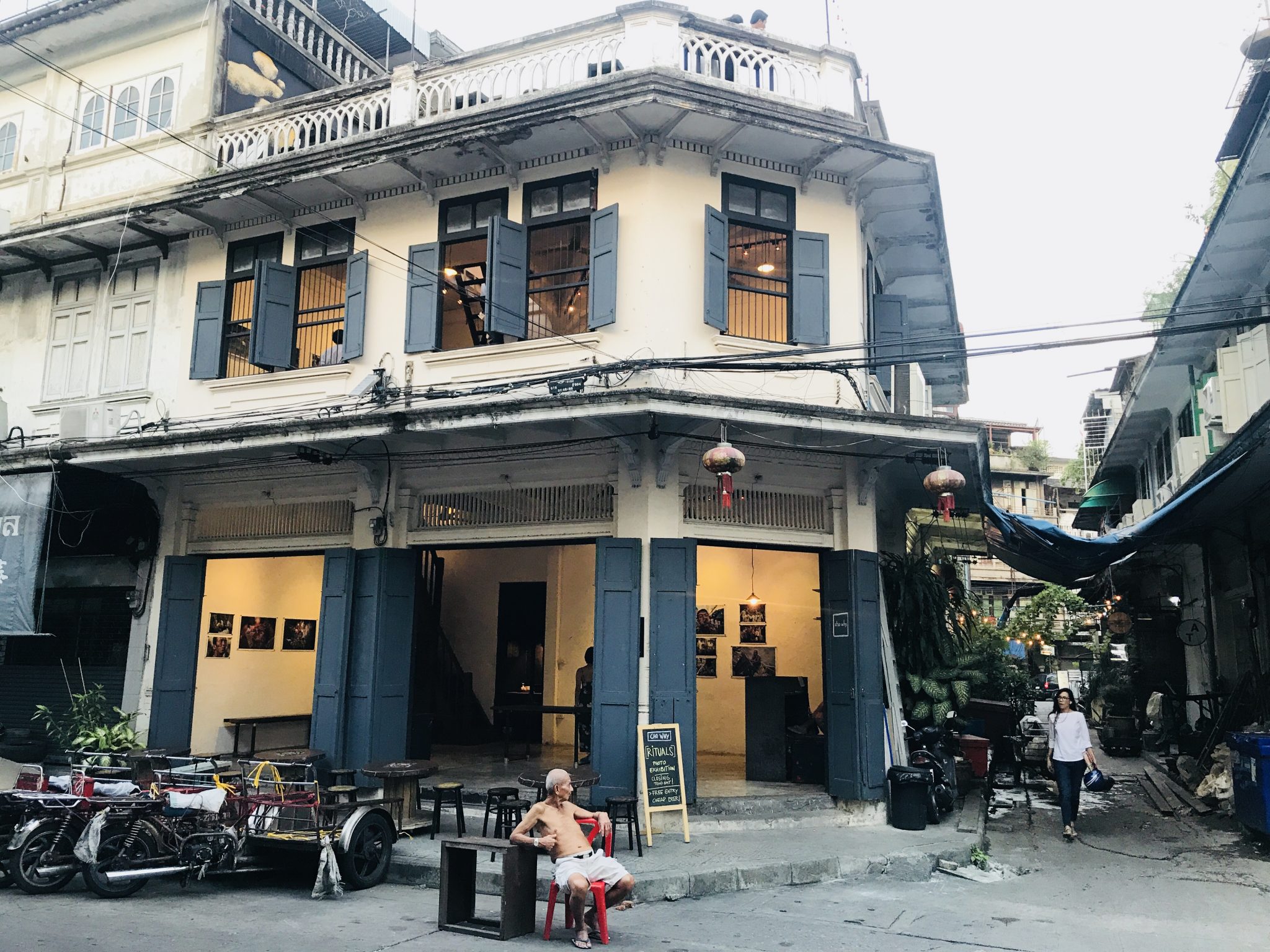 There are several gems that stand out in the labyrinthine maze that is Chinatown. Bohemian Soi Nana (not to be confused with Soi Nana in BK’s red-light district) is a strip on the Eastern fringe and undoubtedly one of Bangkok’s coolest streets, marrying a perfect synergy between hipsterdom and heritage. Chinatown’s appeal lies in its quaint charm and as is expected, there have been numerous stand-offs between passionate preservationists and developers with a gentrification agenda. It’s an ongoing challenge in the face of inevitable development but having said that, there are still an impressive number of heritage buildings in Chinatown. Fine examples of ancient Chinese-style architecture are everywhere, both as they were eons ago and reimagined.  Cho Why, a contemporary art space, attracts a dedicated following through exhibitions, installations, colabs and works in development as well as foodie events like rooftop paella evenings, craft beer fairs and film screenings. A meander through the warren of alleyways will reveal secluded eateries and drinking holes that are some of Bangkok’s best kept secrets, frequented predominantly by its citizens but where everyone is warmly welcomed. Tep is a well-known traditional Thai music bar and, a few steps away in a renovated triple story building, is one of the city’s most highly rated coffees shops, the floral-themed Wallflowers Cafe, (that used to be called NaNa coffee Roasters) selling designer cakes  and delish tipples like sticky rice and mango cocktails (yes really) and a top notch flat white. In 2018, when I was there, the award winning barista Warong Chalanuchpong was in charge behind the counter. Oneday Wallflowers florist is on the ground floor, where you can learn to create bespoke bouquets. If you go all the way up from the café you’ll hit the coolest spot of all,  Wallflower Upstairs, the bar, magical at night with all the fairy lights looped among the foliage. Chinatown is known as a gastronomic destination as well with loads on offer especially on Yaowarat Road.  Top end restaurants like Cotton in the Shanghai Mansion Hotel and street food stalls like Lek Rut entice with fare that will make you forget everything you thought you knew about Canto-Thai  cuisine. For Spanish tapas, El Chiriguita is unchallenged and if gin is your thing, then look no further than Teens of Thailand, Bangkok’s only dedicated gin bar.

Part with your Baht on narrow Sampeng Lane on Soi Wanit 1, one of the most comprehensive markets you’ll encounter in Bangkok. Between early morning and 6pm when it shuts down, tourists rub shoulders with locals, bargaining for goods at row upon row of stalls heaped with everything from snacks to trinkets, porcelain, textiles, craft, furniture and gold, a heavily traded commodity. Shop for it on Yaorawat Road where specialist stores like the family owned Tang Toh Kang, Sampheng’s most established gold store that firstopened in 1875.  For the sneaker obssessed, like moi, Balanna Plaza stocks just about any brand you can think of, at wholesale prices.

There are more than 40,000 temples (wats) across Thailand and Chinatown is pride of place for two  important places of worship: Wat Traimit  that houses a 5 ton seated Golden Buddha, and Wat Mangkon Kamalat which was built in 1871 and ranks as the most important Chinese-Buddhist temple in all Bangkok. Access it via Itsarphap Lane where vendors outside sell dry goods like nuts, herbs and spices. 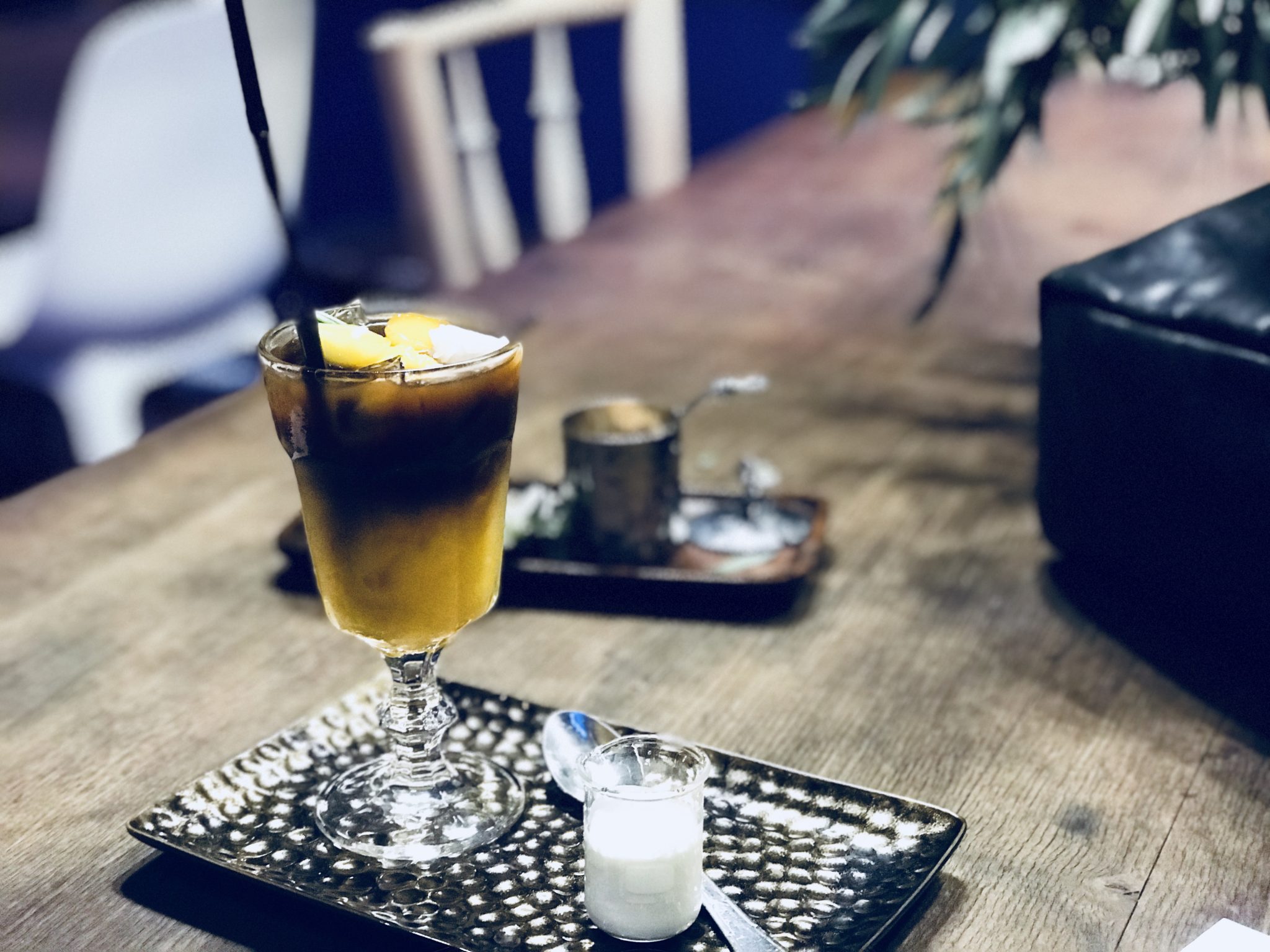 CHINATOWN is a marvellous collision of culture and tradition. Enjoy the delights!

First time in Bangkok: I’ve got you covered!

Bosjes Chapel, poetry of form in the Breede River Valley