Porto, the gem of the Iberian Peninsula 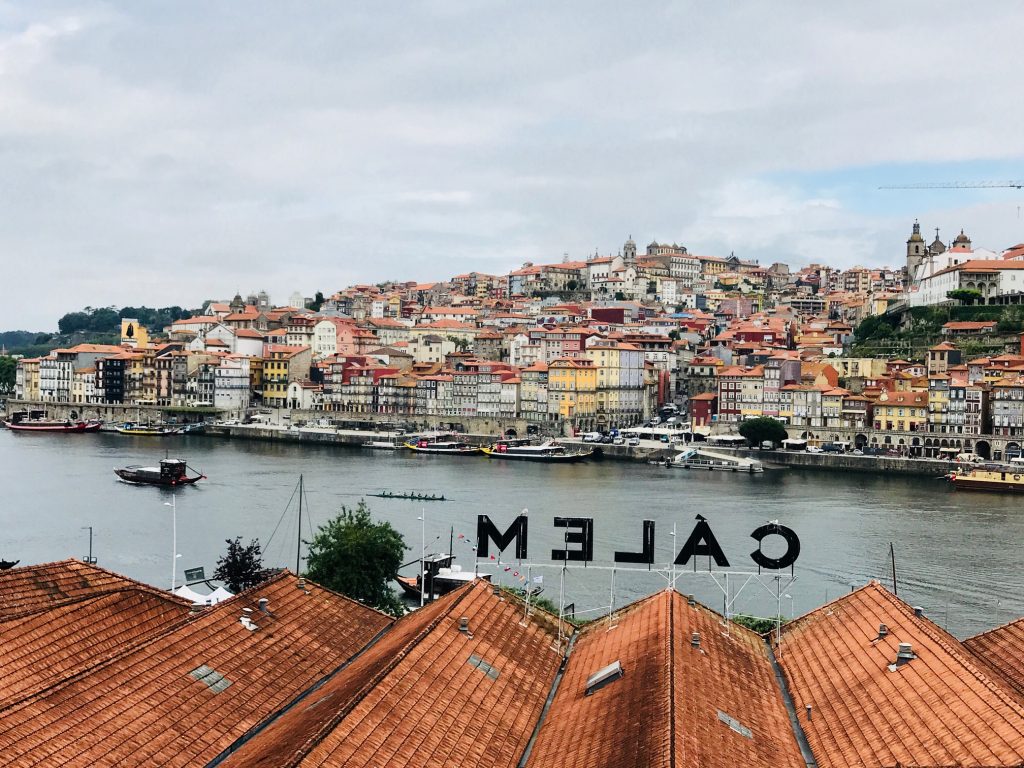 If you’re heading to PORTO and time is tight, here are a few tips to ease you into one of the most captivating cities in Portugal, located 3 hours from Lisbon.

It was the late Anthony Bourdain who said that Porto is a place where everything old is new again, and he was on the money. Portugal’s second largest city aka Cicade Invicta (the unvanquished city) has thrice won the European Best Destination title, is a UNESCO World Heritage Site, and the rising star of the Iberian Peninsula, all prettiness, port and palaces on the banks of the Rio Douro.

Porto, also known as the capital of the north, is a Portugal’s second largest city after Lisboa, on the Iberian Peninsula. Famous for port wine and football – FC Porto – the city oozes charm and has one foot the past and the other firmly in industrial present, like so many cities on the continent. 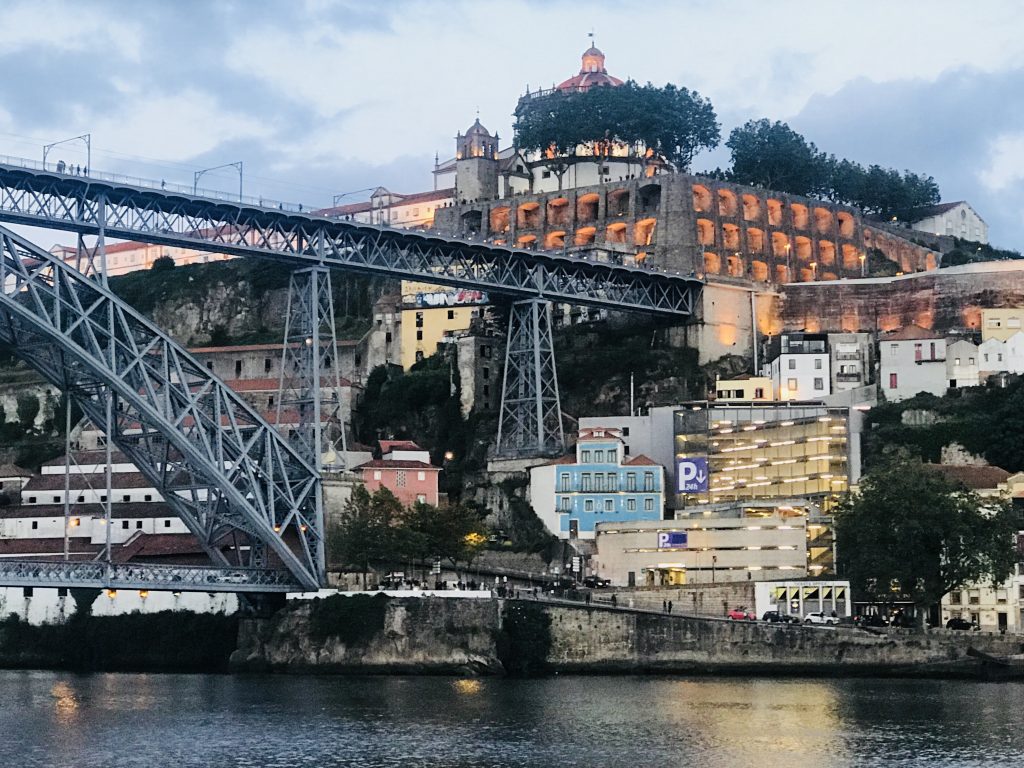 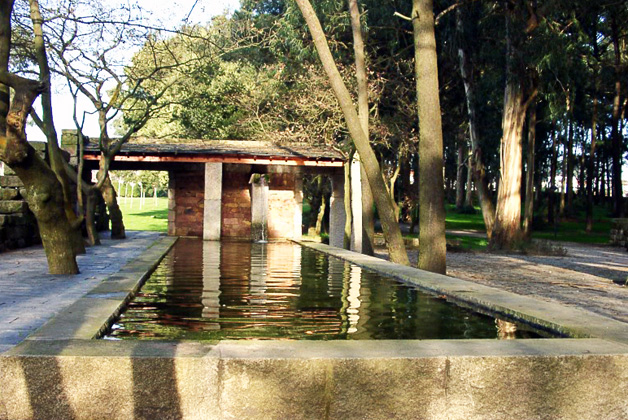 Embrace the day with a stroll through Parque da Cidade, Porto’s urban lung and a beautifully landscaped area spanning 83 hectares of green bliss that stretches as far as the Atlantic. The park, an eco haven designed by Sidónio Pardal, has been hailed by the Portuguese Chamber of Engineers as one of the country’s100 most remarkable works constructed in the 20th century. Another beautiful to place to wander is in the Jardins do Palacio de Cristal in Massarrelo, the landscaped gardens that were designed in the 19th century offering fountains, paths & gorgeous Douro River views. Besides the botanical species and peacocks walking around, take a look at the Carlos Alberto Chapel and the Porto Municipal Gallery, dedicated to modern art. 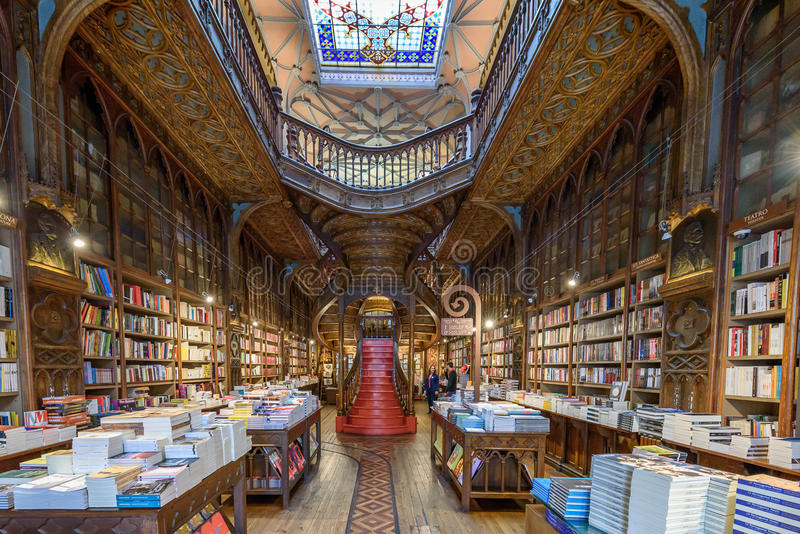 Livraria Lello, known for its exquisite interior, show stopping carved staircase and Neo Gothic façade, is touted as the third most beautiful library ever built and is rumoured to have been J.K. Rowling’s inspiration for her Harry Potter novels. Sit beneath the bas-reliefs and friezes, flip through a rare edition and plot the days itinerary in a uniquely beautiful environment.

Nothing makes a pastel de nata slip down better than a flat white and in Porto you can chase the tartlet at an endless supply of cafés, stand up bars & eateries. Espresso (un cimbalino) seems to be the ultimate social enabler in Portugal and locals find any excuse to stop and chat over a demitasse. Down one at the corner shop or on the terrace at hip Moustache, a cafeteria-style cafe in a restored building overlooking Carlos Alberto Square, near the iconic landmarks Carmelitas Church and Clérigos Tower where you’ll be rewarded after a hike up 240 steps with killer views across the city.

Browse contemporary galleries, vintage stores and cool cafés around in Bombarda, Porto’s vibrant art district. When new exhibitions open every two months, there are a few launches to diarise on 20 September – shops stay open late and there are free music events and street entertainment.  It’s close to Ribeira Square and the Palácio  de Cristal botanical gardens, another lush escape,  with sculptures, fountains, the Romântico Museum and spectacular scenery. 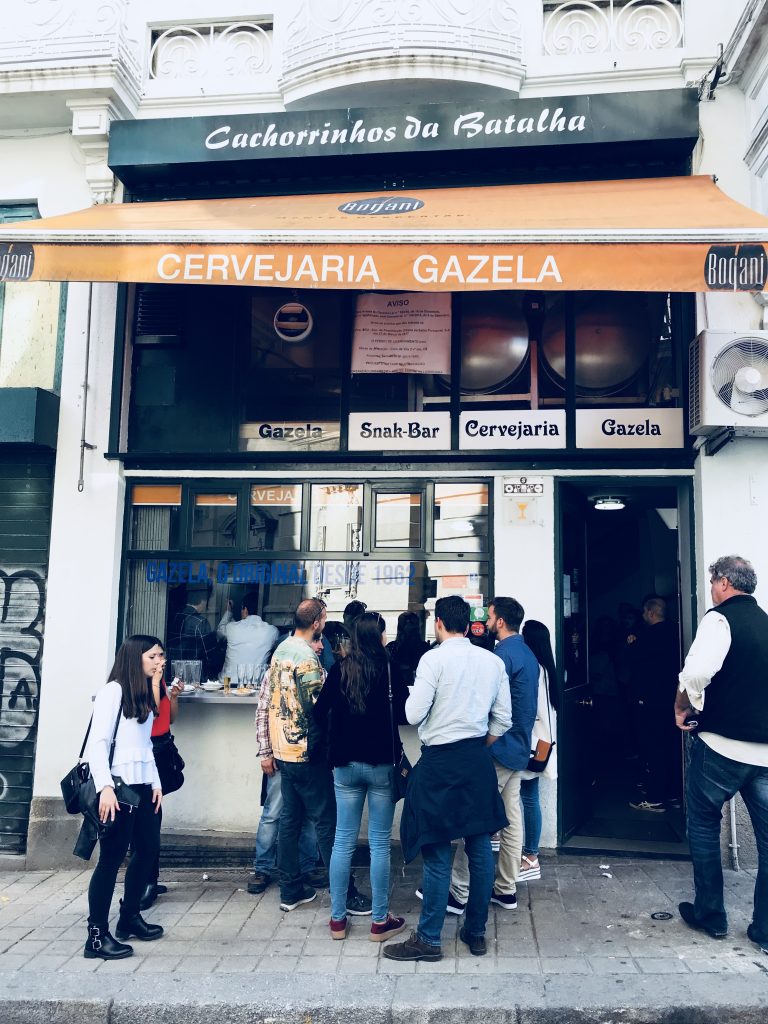 Cervejaria Gazela next to the Teatro Nacional São João, got great PR when the late Anthony Bourdain crossed the threshold and raved about the signature cachorrinhos. A crispy toasted roll filled with chorizo, spicy sauce and melted cheese, sliced and served with an ice cold Super Bock beer on the side is hotdog heaven and the highly entertaining kitchen theatrics deserve a round of applause all of their own. As Bourdain aptly put it- “Meat, cheese, fat, bread: it’s the immortal combination!” Re the latter combo, don’t leave Porto without trying a traditional francesinha sandwich, enough to make any banter run for the hills. 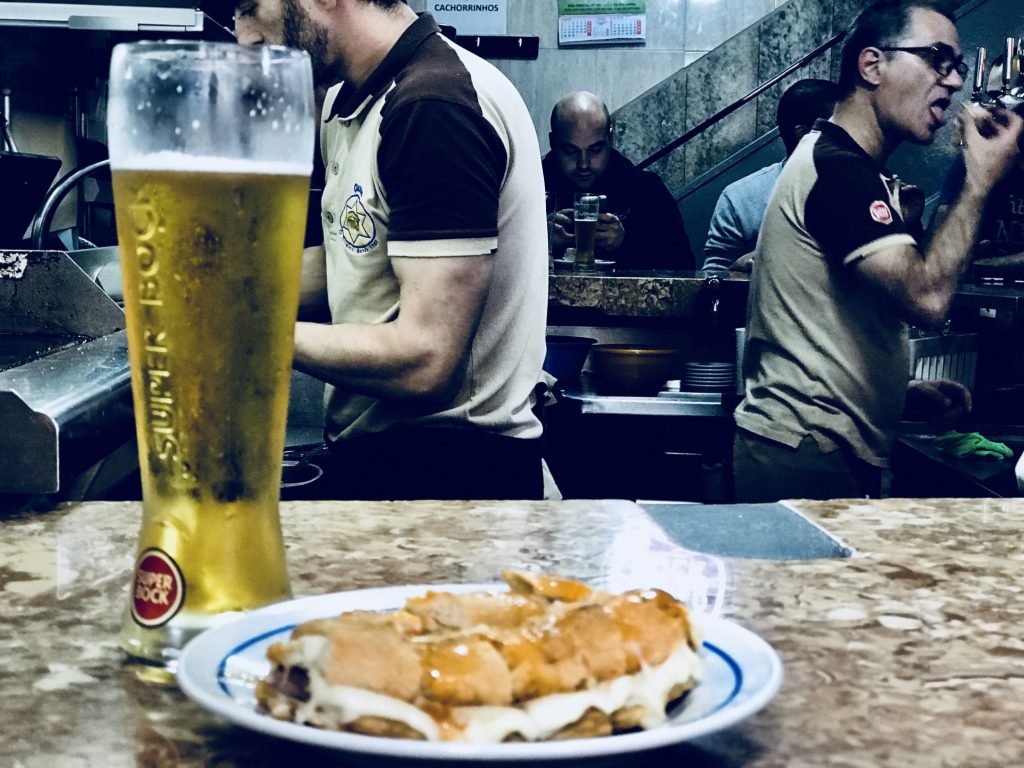 Burn off the carbs with a walk from the waterfront up the hill to the classically renovated Graham’s 1890 Lodge, a working cellar located on a ridge on Vila Nova de Gaia. Book a tasting and a tour in advance and afterwards do lunch on the verandah at the award winning restaurant and bar, Vinum and soak up the jaw dropping vistas across the historic city centre and landmark Dom Luís I Bridge that was designed by Gustav Eiffel of Parisian tower fame. Don’t leave without a bottle of tawny port. 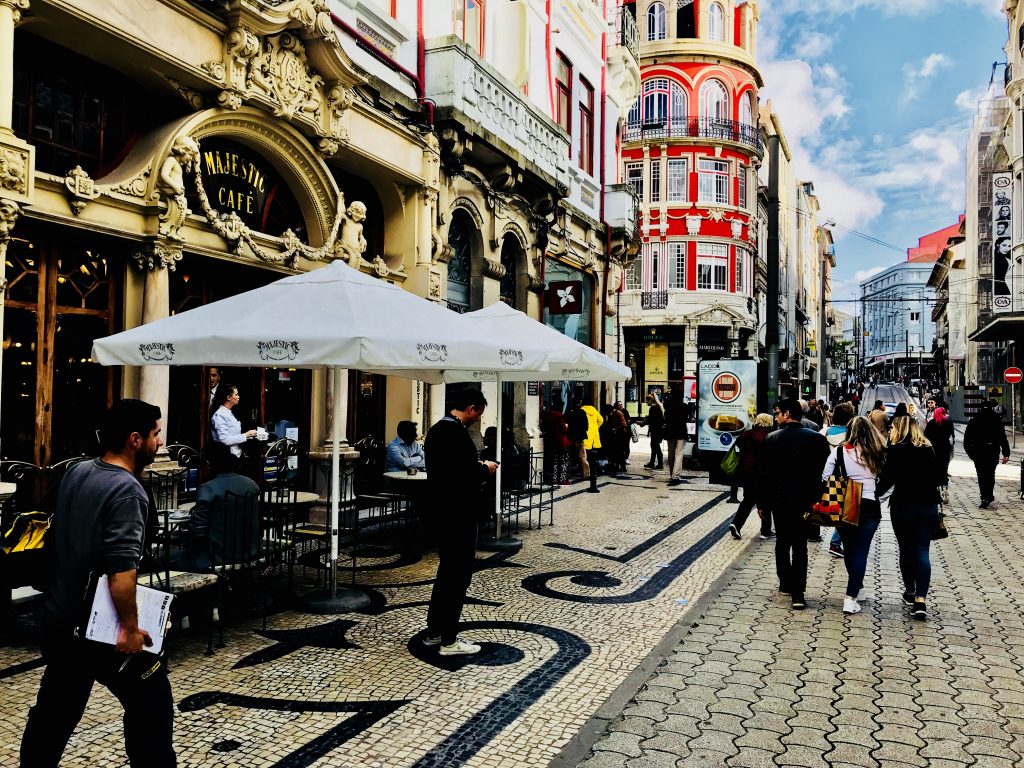 Ten minutes from the tiled masterpiece that is the San Bento Railway Station is where you’ll find the opulent Café Majestic, a throwback to La Belle Epoque era.  It opened in 1921 as Cafe Elite when it was the go-to place for the posh, also favoured by writers and poets. After falling into ruin, it underwent reconstruction, re-opened with the same touch of glamour  and declared a cultural heritage site in 1983.  It’s well worth waiting in line for the high tea, pastries and the memorable French toast with egg custard. 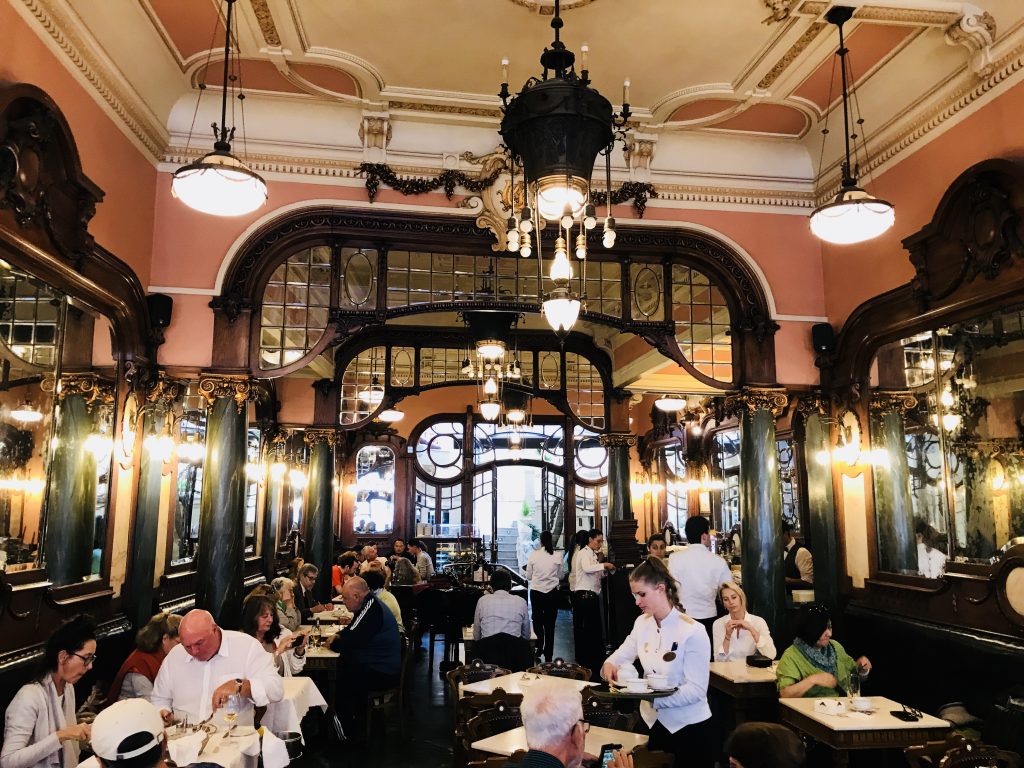 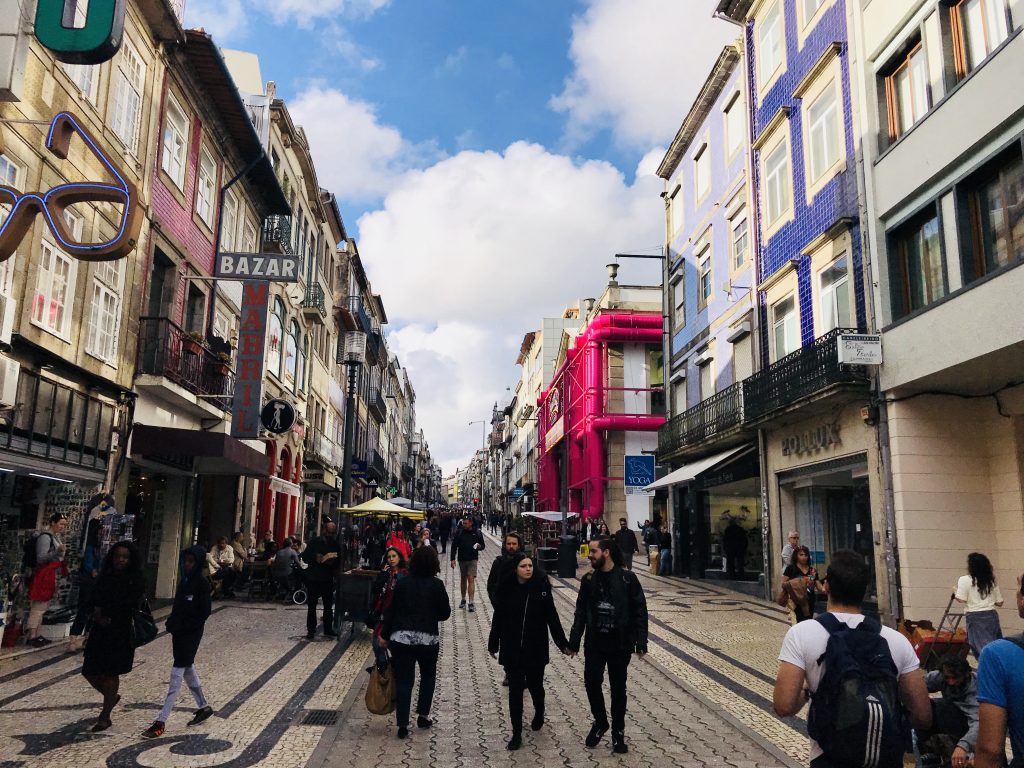 Starting at Praça (park) de Batalha is Porto’s most famous pedestrian street, Rua Santa Catalina, a 1500 metre commercial artery located on the higher part of the city and its main shopping thoroughfare. A glut of top end stores, restaurants and patisseries lie in wait for your Euros, and it’s worth venturing into the side alleys or more traditional type shops and a few hidden gems.  The walkway is also conveniently close to many other hotspots like the Bolhão Market on Rue Fernandes Tomas and the Santo Ildefonso church with its magnificently tiled exterior.

Cocktails at The Yeatman are a given. The plush hillside hotel, flanked by some of the finest port lodges in the world, was voted as the best wine hotel in 2015 for the second consecutive year. Dick’s rooftop bar has a swanky private club feel and a G&T overlooking Ribeira is hard to top. 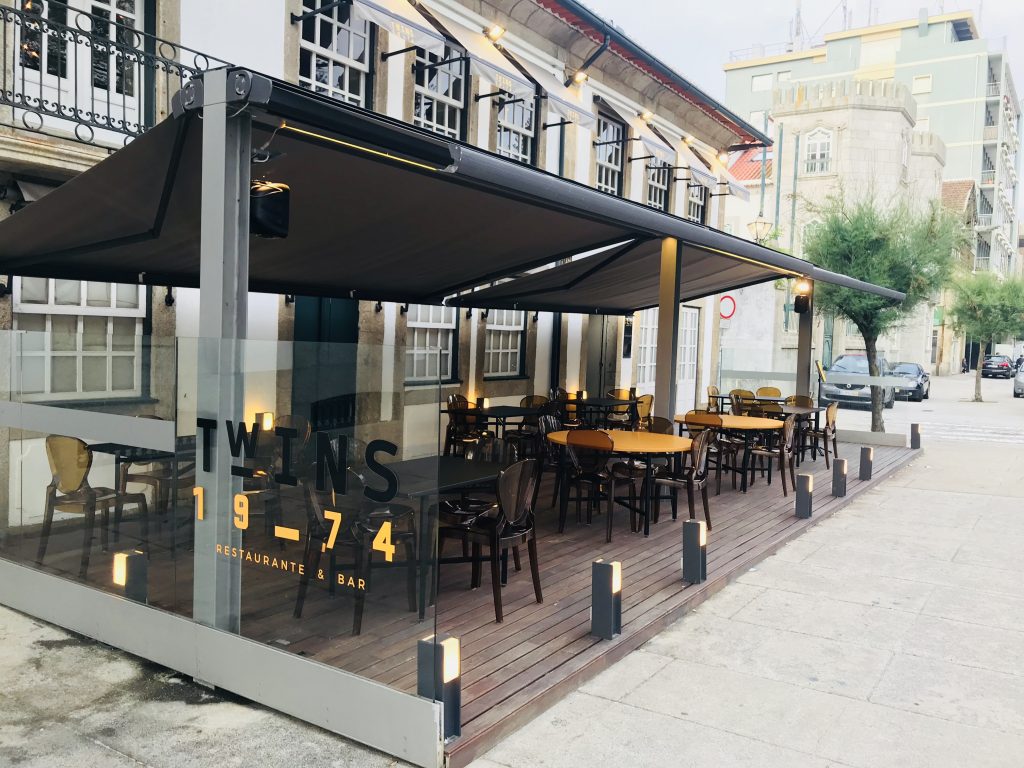 The once legendary nightclub across from the beach in downtown Foz, called  Twins 1974, got a new lease on life some years ago and is now an upmarket restaurant, cool bar and club. The cuisine is contemporary, the mixologist serves classic cocktails and a mean sangria, and the striking decor by Paulo Lobo pops with colour. Be prepared for a boogie and a long night out, especially in the summer. 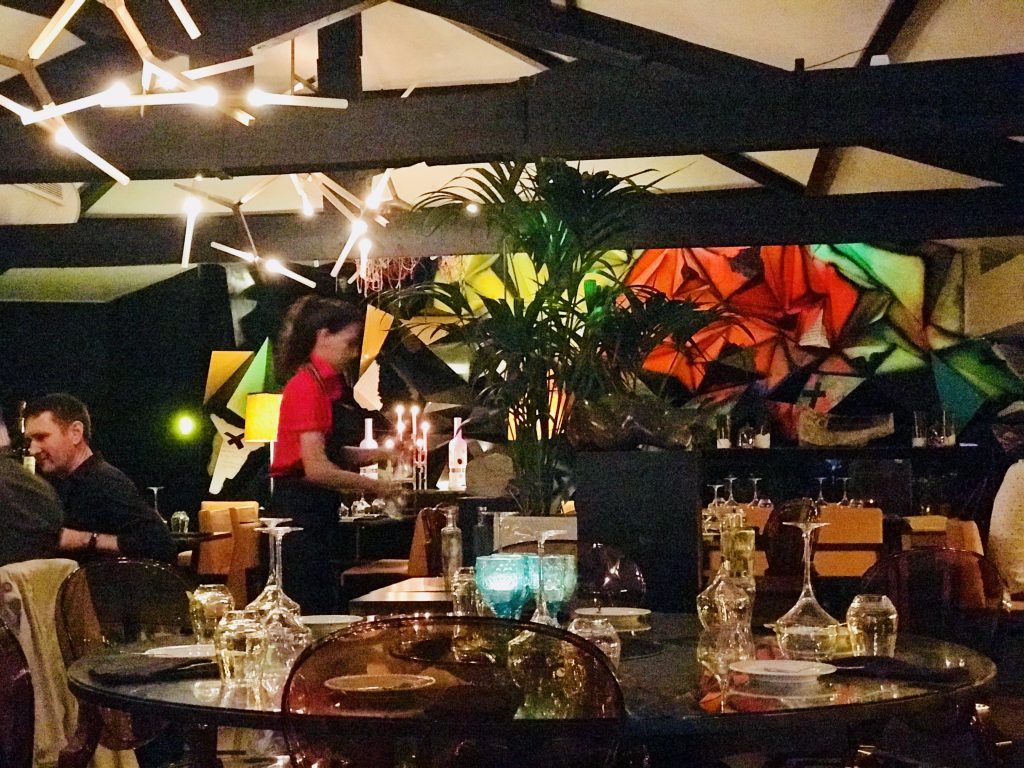 You’ll likely roll out of your restaurant at 23h00, the ideal time for late night grooves at HotFive jazz club, the oldest in the city that books some of the most respected musos town. If Miles Davis was around, you’d find him there- this is where people go who live and breathe the blues.

Day tripping from Porto to the Douro Valley 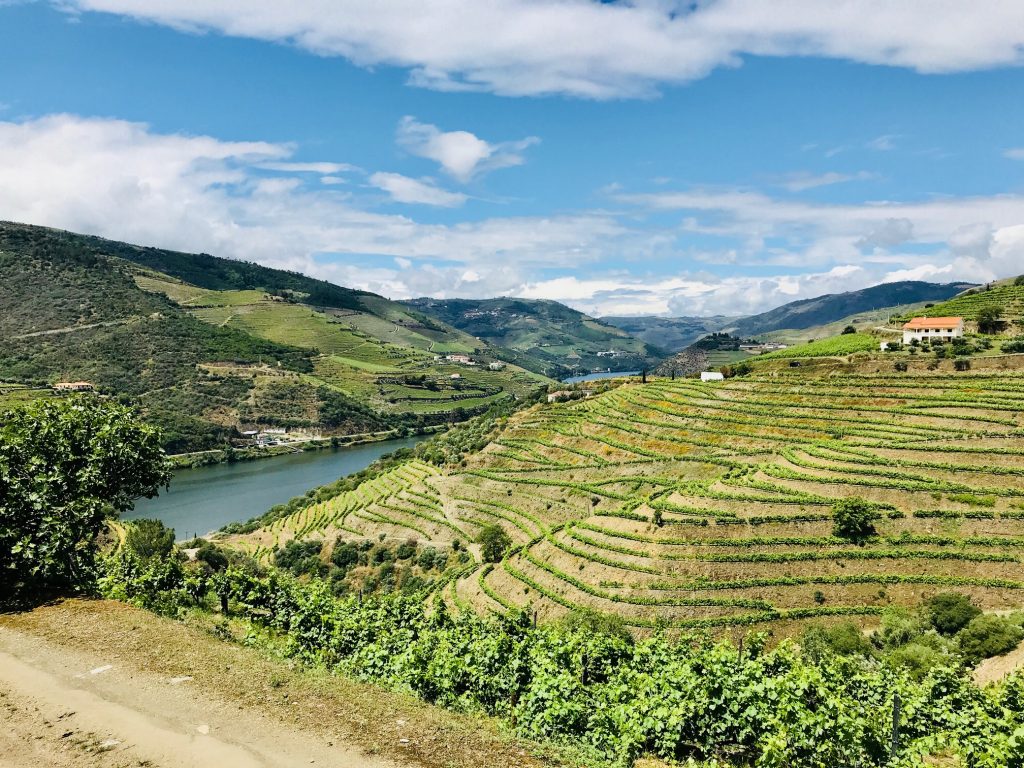 The Douro Valley, a UNESCO World Heritage Site with its own unique micro climate is a 3,5 hour road trip from Porto and is without doubt one of the most gorgeous parts of the world, and a quiet two-hour eco- cruise in a light craft up the Douro takes in terraced vineyards and extraordinary geology, fauna and flora, making a visit to the region a bucket list experience. Stop at the Quinta Nova Lodge, established in 1764, take a tour and end off with an unforgettable meal at  Conceitus accompanied by a bottle of their sublime rose. Enjoy Porto- and while you’re at it, don’t forget Lisbon, the Algarve and basically the whole country- it’s stunning!

Woke to cork – taking design & innovation into the green